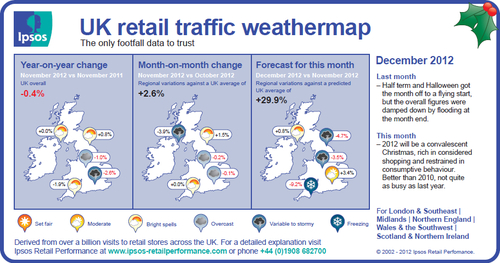 Retailers will need to be on their mettle this month, able to respond quickly and decisively to competitive action and pricing initiatives

November heralded another improvement in retail footfall levels, according to Ipsos Retail Performance. The Retail Traffic Index (RTI), the longest standing metric of shopper numbers in the UK, recorded a marginal decline of 0.4% against November 2011, far stronger than the 3% deficit in October. Month-on-month, the RTI saw a 2.6% increase across the country.

Dr Tim Denison, Director of Retail Intelligence at Ipsos Retail Performance, comments: “Since July we have seen the underlying trend in retail footfall improving, closing a 6 point deficit on numbers from last year. November’s figures are particularly encouraging, given the strength of 2011 comparison. This marks a significant step forward, building a belief that the worst is now behind us and that the ‘new normal’ has arrived.

“Such is the importance of the retail sector to the economy - contributing almost 10% of GDP - that politicians and retailers alike will welcome the news that metrics such as the Retail Traffic Index and Ipsos MORI’s Economic Optimism Index are moving in the right direction. It is certainly the case that consumers are comparatively better off financially than they were earlier in the year, as average wage rises reach parity with inflation.”

November footfall figures would have been better still, had wet weather and flooding not deluged parts of the country in the last week of the month. In South West England and Wales, the region most affected, shopper numbers were depleted by 9.3% during the week commencing 18th November, compared against the same week of 2011.

With Christmas Day just a few weeks away, retailers will be hoping that the weather does not have any further detrimental impact on shopper numbers.

“It’s always tricky to forecast for the all-important month of December, especially as shopper sentiment and behaviour has altered in recent times,” continues Denison, “but our model is predicting a modest decline in the number of shopping trips of -2.1% year-on-year. The strong performance last year, with footfall 2.9% higher than 2010 and Christmas Day falling on a Sunday, is projected to overpower the current gentle upturn.

This year, Christmas shopping may be more about convalescence, with consumers simply content to spend what they have, and electing not to extend themselves beyond that. The monthly RTI statistics show that 2012 has been a sobering year, one in which shoppers have learnt to be less consumptive and more questioning about the real value of what they buy.

“Retailers will need to be on their mettle this month, able to respond quickly and decisively to competitive action and pricing initiatives,” says Dr Denison. “Stock levels will be smaller than previous years, so on best-selling lines the brave-hearted might decide not to push the discount button and instead be prepared to gamble that demand will exceed supply.

“It will be interesting to see how this plays out among retailers with the likes of the imminent Nintendo Wii U launch. Christmas always has its winners and losers. In this respect 2012 will be no different - the winning retailers will be those that best respond to the shoppers’ call of ‘give me a reason to buy!’”

Note: Ipsos Retail Performance will be providing weekly RTI updates in the run-up to Christmas.

Ipsos has been listed on the Paris Stock Exchange since 1999 and generated global revenues of €1.140 billion ($1.6 billion U.S.) in 2010.
Visit www.ipsos.com to learn more about Ipsos’ offerings and capabilities.