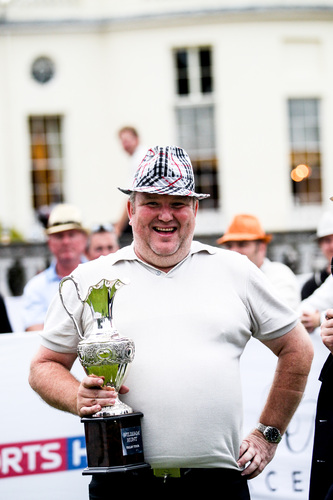 "This has absolutely broken me...I never want to go through that pressure again!"

The event was broadcast on Sky Sports as part of the Trilby Tour Amateur golf series.

The 41yr old construction manager from Ripley, Derbyshire and 1-handicapper beat over 120 finalists, whittled down from an intial field of 1200 competitors.

"This has absolutely broken me...I never want to go through that pressure again!"

His first time playing in the Trilby Tour, Carl Powell says he decided to enter after watching it on television:

"I took a look at it on Sky Sports and it didn't take me long to decide I was going to enter. What a great event!"

Powell, a member of Ormonde Field Golf Club in Codnor, Derbyshire, can be seen throwing his hat in victory after the winning putt.

Last year's champion James Voce congratulated the new winner: "He was brilliant all the way through and held his nerve - he totally deserves to win."

"A massive well done to Carl Powell - what a game and what a play-off! His standard of play was superb throughout and it couldn't have happened to a nicer guy.

He really did seem to come out of nowhere and what a victory!

I don't think anyone saw it coming but that's the fantastic thing about the Trilby Tour - it really can be anyone's game. It all depends on how you cope on the day in front of the crowds and cameras."

Entry to the Trilby Tour can be made online at www.williamhunttrilbytour.com

New additions to the Trilby Tour for 2013 will include a single and doubles Matchplay event as well as a Better Ball Pairs competition.

END OF RELEASE
For more info and images please contact Tuanne Nuen on 0207 428 6777 or email tuanne@williamhunttrilbytour.com

Each round is broadcast as part of a summer series on Sky Sports with the top prize going to the winner of the final event. Players pay a £275 entry fee and are kitted out with William Hunt outfit, trilby hat, limited edition golf bag, and caddy outfit.

A Professional Event for Amateurs
The appeal of the tournament lies in its unusual competitive format and concludes with a 4-man, 3-hole shootout to decide the winner.

The tournament has had an incredibly enthusiastic response from the Amateur community with players hailing it the closest experience to a Professional event, playing under the pressures of an international televised event. Die-hard fans return year after year gripped by its fierce competitive format.