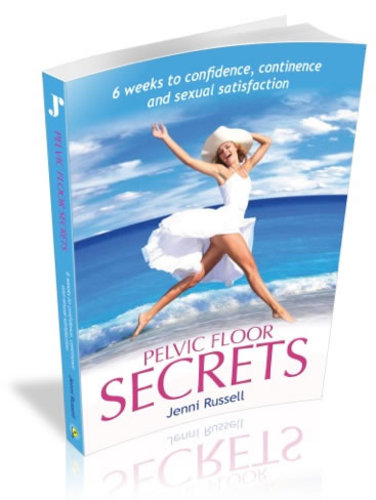 Celebrity fitness guru Jenni Russell (http://www.jennirussell.com) not only shares her passion and her knowledge in her new book entitled Pelvic Floor Secrets but also issues the challenge that its readers need only “6 weeks to confidence, continence and sexual satisfaction.”

This may seem like a tall order, but Jenni is a girl who knows what she’s talking about.  Pelvic Floor Secrets is based on the unique, holistic programmes that will reverse the damage caused by pelvic floor dysfunction which she runs from her Harley Street based clinic.

With a foreword written by actress Jenny Seagrove, the 230-page book is made up of 14 chapters dealing with everything from “What is the Pelvic Floor” to “Testicular Cancer and Prostrate Issues”  written in a style which is informative, educational and at the same time easy-to- read.

“I know from the number of men and women who come to my clinic for help that there is a crying need for pelvic floor education and “Pelvic Floor Secrets” aims to do just that.  I’ve tried to turn the six week course that I give in the clinic into an easy to follow manual that will help women, and men, through all stages of their life achieve the confidence, continence and sexual satisfaction they deserve!”

For further information, review copies, photographs as well as interviews with Jenni

* Jenni is a CHEK certified Exercise Holistic Nutrition and Lifestyle Coach (Level 1) with over 20 years of experience as personal trainer.  As well as being in constant demand as an exercise coach, Jenni is a seasoned athlete and has been crowned “Britain’s Fittest Woman” having won the British Ultrafit Championship three times (1995, 1998 and 2000).  Her other successes include, winning Channel 5 game show The Desert Forges in 2000.  She has also run in both the London and New York Marathons.

* She has specialised in pelvic floor health since 1996.   Jenni launched the first ever pelvic floor clinic using her uniquely holistic approach which is based at One Harley Street, London WI.   As such, it is the only clinic of its kind which offers men and women of all ages the opportunity to have it all: confidence, continence and sexual satisfaction in as little as six weeks.

* Jenni’s first book, Can a Vagina Really Buy a Mercedes? (sub-titled What can your pelvic floor do for you?)  featured on ITV’s This Morning (2006) and appeared in the News of the World Sunday Magazine as a full page article. She has also appeared in BBC 2’s Economy Gastronomy (2009) and Channel 4’s Celebrity Wife Swap in a cameo role alongside her client, singer and TV personality Sinitta.

* Jenni is a prolific writer and a regular speaker on pelvic floor health and a regular contributor to local radio -- BBC London presenter Vanessa Feltz describes Jenni as having an “Obama-like quality.”