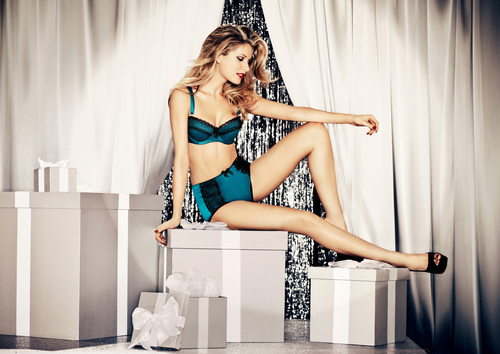 Feedback to our first Boux Avenue ad has been phenomenal

Advertising Hat-Trick for Theo Paphitis
- From Nightwear to notebooks and homewares -
Boux Avenue, Ryman and Robert Dyas on TV this Christmas

When many businesses are cutting their marketing budgets, Theo Paphitis has chosen to do the opposite with his three key retail brands – Boux Avenue, Ryman Stationery and Robert Dyas.

The very first TV commercial for the Boux Avenue lingerie and nightwear brand has just broken on ITV’s Daybreak, showing a fun and flirty campaign with the tag line, Reveal The Magic this Christmas at Boux Avenue.

The sassy 30-second TV film was created in house and complements radio and press campaigns that run in the build up to Christmas. Media buying is with TMS 12.

There are 17 Boux Avenue stores in the UK, franchises in Iceland, Malta and Gibraltar and an interactive website. The brand was launched just 20 months ago and is the fastest-growing lingerie and nightwear label in the UK.

Ryman Stationery, which is a 120-year-old business, is running its first ever TV commercial, breaking nationally this evening. There are two 20-second films – one promoting an HP printer and a Brother Labelling Machine and a second advertising Really Useful Boxes and a Moshi Monsters Colouring & Writing set. The strapline says, For great deals and perfect gifts, you can rely on Ryman.

The latest TV campaign to promote Robert Dyas broke in late October and features nine different 30-second ads. The commercials all feature special offers from leading brands such as Morphy Richards, Russell Hobbs and BT, as well as new gadgets and gifts such as the American Originals Cake Pop Maker at £16.99 and the Doctor Who Remote Control Dalek at £24.99. Advertising for the Robert Dyas Christmas Sale starts this week.

Ryman hired 438 Marketing in Manchester for their campaign while the Robert Dyas adverts were produced by the London-based production company, Fin. Media buying for both campaigns is through the7stars.

TV Dragon Theo Paphitis, who is chairman of all three companies said, “I am thrilled to see all brands on TV at the same time. The ads are designed to drive traffic to our stores and on line during the crucial pre-Christmas peak weeks. Feedback to our first Boux Avenue ad has been phenomenal and I look forward to hearing similar feedback from our new Ryman and Robert Dyas campaigns.”

The combined group comprises 349 stores and 3,600 employees who serve over 28 million customers a year.

Stills from the commercials available on request.

Theo is a passionate champion of small businesses. He instigated Small Business Sunday on Twitter, shortened to the hashtag #SBS. Each week, business owners are invited to tweet @TheoPaphitis, and include hashtag #SBS, from 5.00 PM to 7.30 PM. The best six tweets are re-tweeted every Monday evenings at 8.00 PM to Theo’s following of over 300,000 people. They are also profiled on a new website www.theopaphitissbs.com.
Theo’s life story – Enter the Dragon – is published by Orion Books in paperback. It gives an insight into the thoughts and aspirations of one of the UK’s most popular entrepreneurs.