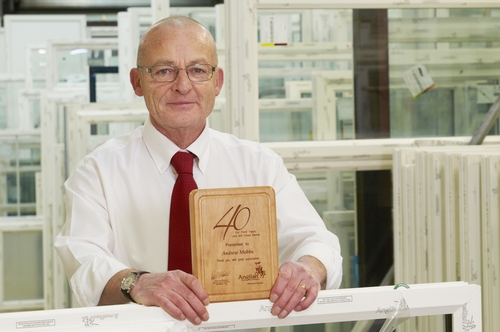 Anglian Home Improvements has held a special awards ceremony to mark the long service anniversaries of 24 of its loyal and dedicated employees, celebrating a combined service of 750 years.

Held on 29th November at the Holiday Inn at Norwich Airport, 21 employees were presented with awards for 30 years’ service and three – Andy Mobbs, Greg White and Trevor Wilson – were given awards to mark an impressive 40 years at window and door double glazing specialist Anglian, one of Norfolk’s biggest employers.

Factory Manager Andy Mobbs was one of those celebrating 40 years with Anglian. He joined the company in March 1972 as a Production Line Operative and has worked his way up through the ranks, being promoted first to Production Foreman, then Senior Production Foreman in the early eighties, Production Manager in the late eighties and finally becoming Factory Manager around ten years ago. He is now responsible for one of the two Anglian fabrication sites that manufacture all of the company’s uPVC windows and doors.

Andy said, “It’s really nice to be recognised and to see my colleagues awarded as well, as we’ve all more-or-less grown up together. Anglian has been a huge part of my life and the industry has been through some radical changes during my time here. We’ve always been at the forefront in terms of innovation – one of my career highlights so far was being part of the project team that installed the state-of-the-art Fast Track manufacturing system back in the early nineties. It was a major project and investment for Anglian and it was really rewarding to see the project through to its fruition. Things never stand still here and I am very lucky to have a loyal and supportive team around me so I still get a real buzz out of what I do.”

Production Director James Wilson said, “Andy has worked with me on and off for most of my 13 years at Anglian. He is Anglian’s longest serving Factory Manager and is a real asset to the company. His experience and commitment have been and continue to be a great strength within the manufacturing team.”

The awards ceremony was hosted by Anglian’s Chief Operating Officer Stig Hansen, who said, “Anglian has been in business for 46 years now and we’re very proud of our heritage but it’s the people here who make it such a great place to work. Their long service demonstrates their commitment and loyalty to the business, and it is a privilege to celebrate this with them and give them the recognition they deserve for such outstanding service. It is part of our company philosophy at Anglian to nurture and celebrate talent, so we’re delighted to be in a position to present so many long service awards today.”

The 24 employees were each presented with a commemorative plaque to mark their years of loyal service, along with a Cottrills voucher so they can treat themselves to something special.

For information about the full range of Anglian products, visit anglianhome.co.uk.

Established in 1966, Anglian Home Improvements is the UK’s leading home improvements company, responsible for the employment of 4500 people. With more than 45 years’ experience of providing uPVC double-glazing windows, Anglian ensures it is ahead of the competition with a continuing research and development programme. Anglian offers an extensive range of home improvement products, including double glazing replacement windows and doors, conservatories, driveways, solar products, garage conversions and roof trims.