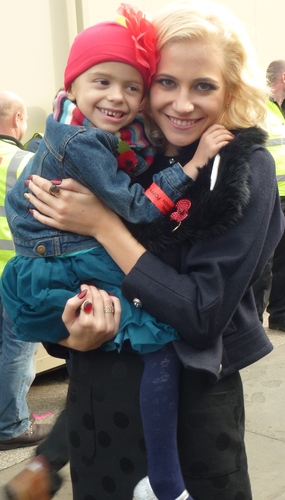 A four year old fan has inspired Pixie Lott to become an ambassador for Rays of Sunshine Children’s Charity. www.raysofsunshine.org.uk

The singer songwriter met bubbly, Bella from Swindon during a meeting arranged by the charity last year. Pixie was so moved by the little girl that she named a necklace from her Rock ‘n Rose jewellery collection after her and decided to become an ambassador for the charity, which grants wishes for seriously ill children in the UK aged 3-18.

Bella was diagnosed with muscle cancer in the wall of her chest last year. She has undergone surgery, chemotherapy and radiotherapy. Her condition was deteriorating and her mum contacted Rays of Sunshine for a desperately needed distraction from her medical appointments and treatment.

Despite her condition Bella is a happy and lively child who loves pop music and is a huge fan of the All About Tonight singer. The charity arranged a girly getaway to London for Bella, her mum Hailey and godmother Liza. After a night in a top London hotel, a Rays of Sunshine representative escorted them to Trafalgar Square where Pixie was performing. Bella and her mum sang and danced their way through the concert, before being taken backstage to meet Pixie after the show.

Bella’s mum, Hailey said:
“'Meeting Pixie has proved as beneficial as any medicine,' said Bella's mother Hailey Restuccia.
'Bella's smile after she met Pixie was amazing, she was smiling from ear to ear and couldn't quite believe what happened or that she was real. 'It's inspired her so much, and it's amazing that she's responding to treatment for the first time,' the 33-year-old said.
'It's the best news we've had for a long time.'
Pixie said:
“I am absolutely honoured to become an ambassador for Rays of Sunshine. Bella’s twinkly, smiley face made my day and I only hope I can help the charity to spread more beautiful smiles”.

This press release was distributed by ResponseSource Press Release Wire on behalf of Rays of Sunshine in the following categories: Children & Teenagers, Entertainment & Arts, Health, for more information visit https://pressreleasewire.responsesource.com/about.