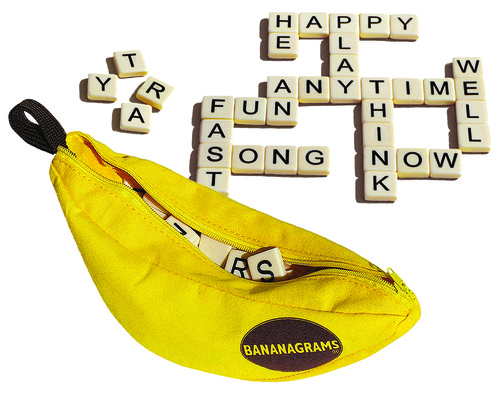 A host of British celebrities have been going bananas for the word game phenomenon, Bananagrams. The addictive game, already a hit with international stars including Kristen Bell, Scarlett Johansson, Cindy Crawford and Kelly Clarkson, is gathering a following on this side of the pond after its most successful year since launching in London seven years ago.

Xtra Factor presenter Caroline Flack called Bananagrams the “Best game I’ve ever played”, while pop starlet Cher Lloyd agreed it was the “best game ever”. Former Dr Who and I'm a Celeb star Colin Baker became hooked after playing the word game during panto intervals with co-stars CBeebies favourite Chris Jarvis and Benidorm's Asa Elliott. Dame Judi Dench is another Brit star who is so hooked on the game that she now takes it on set to play with cast and crew between takes.

Over in the States, Bananagrams is a staple on the Kennedy compound and has been featured on numerous nationwide TV shows including Saturday Night Live, The Ellen DeGeneres Show and Good Morning America.

Requiring no pencil, paper or board, Bananagrams comes in a small portable banana-shaped pouch and is perfect fun for kids from 7 – 107 years-old, at home or on the go. Created by a word game-obsessed family of three generations, Bananagrams is a labour of love that that has quickly become an international sensation, selling more than six million units in 31 different countries.

Bananagrams (RRP £14.99) is available to buy on the High Street at independent toy and book stores as well as John Lewis, WH Smith, Waterstones, Tesco, Sainsburys, Waitrose and online at Amazon.co.uk, Play.com and WinningMoves.co.uk. Visit http://www.bananagrams.com for more information.

About Bananagrams
Bananagrams®, Inc., is the family-owned Rhode Island company behind a range of innovative word games, including the international phenomenon BANANAGRAMS - the fast, fun anagram game that will “drive you bananas!”. Currently available in 31 countries and multiple languages, original Bananagrams has also spawned a series of books. Bananagrams, Inc. also offers the award-winning Appletters®, Pairs in Pears® and brand-new ZIP-IT® and Fruitominoes®. Jumbo versions of both Bananagrams and Zip-It were launched in summer 2012. All the games feature attractive cloth pouches and need no board, pencil or paper - ideal for children and adults aged seven to 107 who enjoy witty word play, at home or on the go.