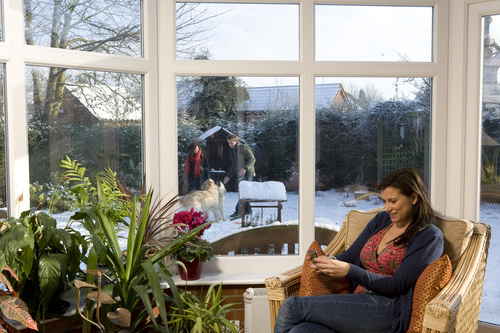 Brace yourself for the gloomiest day of 2013 next week. Monday 21st January, also known as Blue Monday, is alleged to be the most depressing day of the year thanks to a number of factors including poor weather conditions, low motivation and time elapsed since Christmas.

In fact, the lack of natural daylight at this time of year may provide the source of much of this low motivation and is perhaps the real key to beating the winter blues.

A recent survey by Anglian Home Improvements into the impact of reduced daylight over the winter months found that the vast majority of us feel it has a negative impact on our wellbeing.

Residents in the North East are worst affected, according to the study, with a huge 87% saying the reduction in daylight over the winter months has a negative effect on their mood, while almost one in five North East respondents claim the impact is significant. At a national level, 79% feel the shorter days have an influence on their mood, with the least affected region being Yorkshire and the Humber – proving it’s not a simple North-South divide issue.

While a lack of motivation during the winter is common, the study found that the overall impression varies quite dramatically from one side of the county to the other, from 84% of those in the North East to only 72% in the South West noticing any impact at all.

These are startling statistics – especially as there are still more than two months to go before we reach British Summer Time.

Melanie McDonald, Head of Marketing and Communications at Anglian Home Improvements, says, “The survey shows a clear link between natural daylight, mood and motivation. Many of Anglian’s customers have told us they feel happier in the winter after installing a conservatory as they can spend time watching what’s going on in the garden and make the most of the available daylight, so it’s encouraging to learn that little changes – like making sure you sit near a window or somewhere with as much natural light as possible – can make a big difference to how we feel and cope with winter.”

So keep your spirits up on Blue Monday and beyond by ensuring you get as much natural light exposure as possible, even if you’re indoors. For those with a well-insulated conservatory that is easily done but if not, sitting by a window can also make a big difference to your wellbeing and productivity.

Anglian Home Improvements is running a special ‘all seasons’ winter promotion on selected conservatories, offering a free upgrade to Solaroof and Ultra 2 glass in the conservatory wall frames, saving over £1,200 on an average conservatory*. For more information and to view the full range of conservatory styles available, visit anglianhome.co.uk

Established in 1966, Anglian Home Improvements is the UK’s leading home improvements company, responsible for the employment of 4500 people. With more than 45 years’ experience of providing uPVC double-glazing windows, Anglian ensures it is ahead of the competition with a continuing research and development programme. Anglian offers an extensive range of home improvement products, including double glazing replacement windows and doors, conservatories, driveways, solar products, garage conversions and roof trims.