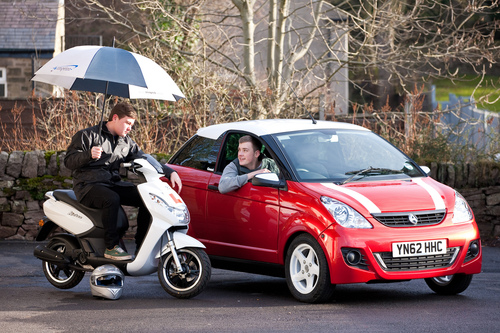 A new road to freedom for teenagers opens up on Saturday when EU rules kick in allowing 16-year-olds to drive car-like light quadricycles on Britain’s roads.
Dubbed “car-peds”, vehicles like the Aixam Coupe S can be driven on a full AM moped licence from January 19, providing safe, and slow, transport for youngsters looking for motoring independence.
And Jamie Coley, from Chapel-en-le-Frith in Derbyshire, is looking to be one of the first of his age in the country to take to the wheel.
The French-built Aixam provides two seats, a large boot, stereo, heating, and a parent-friendly maximum restricted speed of just under 30mph.
But for Jamie, to talk of speed is to miss the point: “I’m not worried about the speed - it’s basically a moped that you sit in, with two seats. You’re not open to the elements and you’re not worried about falling off.
“It’s quite loud, but that’s not a bad thing - a moped sounds like a hair dryer whereas this has a throatier, deeper voice to it. And you haven’t got the vulnerabilities of riding a bike.”
The Aixam is powered by a 400cc Kubota diesel engine, and weighs less than 350kg, key to its classification as a light quadricycle.
There are already more than 300,000 such vehicles on the streets of Europe, with an enviable safety record.
In France, where quadricycles are most popular, they are three times less likely to be involved in an accident than conventional cars, and the Aixam meets rigorous crash test standards.
“I don’t agree with people who say that 16-year-olds shouldn’t be driving - I’ve seen people of any age that should not be on the road, and a 17-year-old can be driving at 70 or 80mph whereas this is much slower and therefore safer,” said Jamie, whose father Simon runs Peugeot dealership Horderns Motor House in the town and is looking to sell the Aixam from a new showroom.
“This will give me a good introduction to driving a car for when I’m 17. I’ll get a sense of what’s around me, how other drivers behave and at a safe speed.”
The reaction from Jamie’s friends has been positive, with a few holding reservations about the low speed.
“They’re not going to be for everybody, but while other people are walking down the road or getting wet on a moped, I’ll be driving, warm and dry. Simple,” he said.
Dad Simon test-drove the Aixam around the hills of the Peak District after seeing the vehicle at its launch at the Motorcycle Live show in November.
“It coped manfully with the hills and it’s a very safe form of transport,” he said.
Simon hopes to sell the Aixam to teenagers before upgrading them into a small Peugeot when they pass their full driving test.
“It’s a fantastic transition for 16-year-olds to get a feel for what it’s like to be a road user without having the ability to drive recklessly,” he added.
“Living in a rural area it’s a big deal for youngsters to have their independence and not have to rely on public transport or lifts to get about.”
Insurance for a 16-year-old in an average post code area is likely to be in excess of £2,000, but broker Adrian Flux expects rates to fall.
“It’s a completely new concept for British insurers, so they will err on the side of caution initially, but if - as experience in other countries shows - the claims performance is good, then we would expect rates to fall in time,” said general manager Gerry Bucke.
Justin Bond, UK manager for Aixam Mega, said there had been considerable interest in the vehicle ahead of the licensing changes.
“We have a number of dealers in place, through some of our existing network and new dealers interested in selling alongside either cars or motorcycles,” he added.
“People need to see it as an alternative to a moped, rather than comparing it to a car, and our experience in Europe shows that they are a popular first step towards driving a car, or a dry alternative to motorcycles in winter.”
Rod Veck, showroom manager at Fowlers Motorcycles in Bristol - one of Europe’s largest dealers - is among the first to sell the Coupe S in the UK.
“We’ve always been prepared to look at new things on the market,” he said. “Our initial impression was that it was a really well made little thing. We were pleasantly surprised at how good the finish was and how good the spec was - it looks and feels just like a small car.
“Although we have a large small bikes section, not every parent wants their son or daughter to ride, and this gives us a different option to sell to them.
“It’s got two doors, two seats, a heater and music, and if 16-year-olds don’t look at that and say ‘I want one’ there’s something wrong with them.”

This press release was distributed by ResponseSource Press Release Wire on behalf of Black Vanilla / To The End Media in the following categories: Children & Teenagers, Motoring, for more information visit https://pressreleasewire.responsesource.com/about.