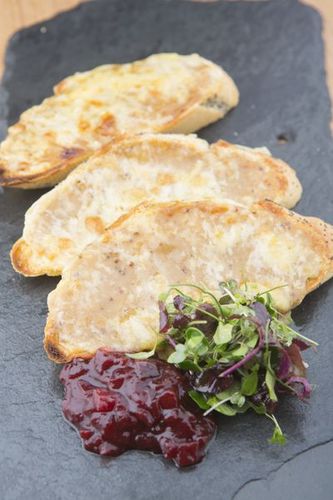 To lift the gloom and celebrate Welsh Rarebit Day, Collier’s has challenged the appropriately named Welsh Rarebit Mini Club from North Wales to take on the “The Collier’s Job” – a North to South Wales dash to deliver a consignment of Collier’s from its home at Llandrynog Creamery in Denbighshire to Cardiff in time for The Welsh Rarebit lunch being held at the Wales Millennium Centre.

Can a fleet of classic Minis, in the Collier’s colours of black and red, complete the mission to safely deliver the consignment of Collier’s in time for The Welsh Rarebit lunch cooked by the Centre’s head chef Kurt Fleming?

“January can be a depressing month for many but feel good food offers welcome consolation,” says Kurt.
“There is nothing better than Welsh Rarebit – the ultimate comfort food that satisfies the senses.
“It only takes a few minutes to make and it really is the perfect snack food – quick, tasty and nutritious. I make mine with Collier’s Powerful Welsh Cheddar, the freshest crusty bread, some Tomos Watkin ale, Double Dragon Welsh Mustard and Worcestershire sauce. I guarantee it will make you feel better after the first bite.
“We are now serving it in the Wales Millennium Centre’s ffresh restaurant and think it will be a popular lunchtime choice with our customers.”
“Blue Monday” has evolved from an idea originally conceived by psychologist Cliff Arnall, formerly of Cardiff University, who created a mathematical formula to identify a number of the elements contributing to a general feeling of mid winter blues.

Method
In a small saucepan melt the butter and add the flour to make a roux, stirring all the while. Cook for a couple of minutes, then add the warmed beer by degrees, until you have a smooth but thick sauce. Add the grated Collier’s and stir until melted. You should now have a thick paste. Add the mustard, Worcestershire sauce and season with black pepper.
Lightly toast then butter the bread, then pile up the cheesy mixture on each slice. Cook under a hot grill until brown and bubbling.

Note to editors
• For more information, images or samples please contact Leigh Roberts at leighr@fayrefield.com or 01656 788336/07739 511466.
Photo opportunities:
• The Welsh Rarebits leave Llandrynog Creamery, Llandrynog at 8am on a mission to get the best consignment of Collier’s to the chef on time and plan to arrive at 12.30 at the Wales Millennium Centre in Cardiff Bay.
• A cameraman will be following to obtain still images and footage en route.

About “Blue Monday”:
“Blue Monday” has evolved from an idea originally conceived by psychologist Cliff Arnall, formerly of Cardiff University, who created a mathematical formula to identify a number of the elements contributing to a general feeling of mid winter blues. It is a complicated equation that contains seven variables such as weather, debt, monthly salary, time since Christmas, low motivational levels and need to take action.
A special campaign web site, www.beatbluemonday.org.uk is offering practical advice to tackle the effects of Blue Monday, the symbolic date for the low point in the year.

About Welsh Rarebit:
Welsh rarebit is made with a savoury sauce of melted cheese and various other ingredients and served hot on toast. Welsh rarebit is typically made with Cheddar and may include ale, mustard, and Worcestershire sauce amongst other things.
The first recorded use of the term Welsh rabbit was in 1725, but the origin of the term is unknown. It may be an ironic name coined in the days when the Welsh were notoriously poor: only better-off people could afford butcher's meat, and while in England rabbit was the poor man's meat, in Wales the poor man's meat was cheese.

It is also possible that the dish was attributed to Wales because the Welsh were considered particularly fond of cheese, as evidenced by Andrew Boorde in his Fyrst Boke of the Introduction of Knowledge (1542), when he wrote "I am a Welshman, I do love cause boby, good roasted cheese." In Boorde's account, "cause boby" is the Welsh caws pobi, meaning "baked cheese". It is the earliest known reference to cheese being eaten cooked in the British Isles but whether it implies a recipe like Welsh rarebit is a matter of speculation.

The term Welsh rarebit is evidently a later corruption of Welsh rabbit, being first recorded in 1785 by Francis Grose. According to the Oxford English Dictionary, ‘Welsh rarebit’ is an "etymologizing alteration. There is no evidence of the independent use of rarebit".

About Collier’s Powerful Welsh Cheddar
Collier’s is a uniquely ‘powerful’ mature cheddar with a long, deep character and savoury, yet slightly sweet taste.
• Unusually, it contains tantalising “crunchy bits” which are actually calcium lactate grains that develop during maturation and are evidence of the cheese’s high quality.
• Launched in 2002, Collier’s is made in North Wales.
• The recipe is a closely guarded secret.
• It is matured for up to 20 months and is regularly and carefully graded throughout its development, until it attains the unique taste and texture that defines Collier’s Powerful Welsh Cheddar.
• Collier’s is available from all major retailers at around £3.99 per 400g.
• Find out more at www.collierscheese.com or at www.facebook.com/collierscheese or www.twitter.com/collierscheese
#ukwelshrarebitday