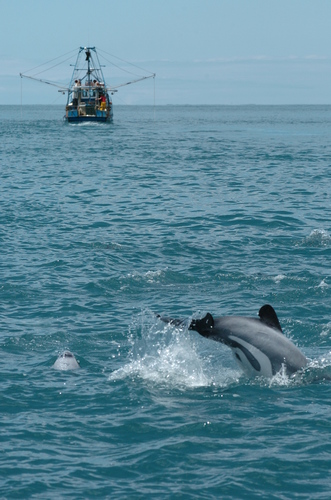 “It is not a sanctuary when trawlers and gill netters pass through the dolphins’ natural domain. The area itself is woefully small.

In the UK in December, the Government agreed to introduce 31 new marine conservation zones – well below the 127 recommended by environment organisations. If what Earthrace has uncovered in New Zealand ( ‘100% pure’ according to its own much hyped self-promotion) is echoed by Government inertia here, Earthrace has serious concerns about how well protected UK marine life will be.

Current estimates are that only around 1,000 of the dolphins remain in this area – between 7-10% of the total population remaining.

As a result of the information received, covert surveillance by plane, motor boat, as well as up to 30km in kayaks, during the day and at night was carried out from 3–13 January 2013.

The local Hector’s dolphin population ranges from close to shore including within harbours, to 20 nautical miles (nm) offshore. They are found regularly in waters up to 100m in depth.

By comparison, the Sanctuary, which includes both Lyttleton and Akaroa Harbours, only extends out to 12 nautical miles (nm), whilst Ministry for Primary Industries (MPI) regulations for fisheries currently allows gill netting to within 4nm from the coast, and to within 2nm for trawlers, taking no account of the depth factor.

Current range of fishing limits useless
Bethune says, “Although not in such dire straits as North Island’s endemic Maui’s dolphin population (a sub-species of Hector’s with only an estimated 50 remaining), this population of Hector’s is rapidly heading in the same direction towards extinction due to unsustainable by catch in fishing nets and a lack of any effective response to the threat by the New Zealand Government.

“The surveillance by Earthrace clearly proves that the Sanctuary needs to be extended much further offshore to take into account the depth as well as the distance that Hector’s travel, and only fishing methods that don’t kill dolphins should be used inside it”.

Slooten says, "It really depends on the depth. As a general rule, they won't go much past 100m in water depth. The distance offshore with depths of 100m ranges from 6 nm off the west coast of the South Island to 20nm offshore around Banks Peninsula. The 4nm exclusion zone for gillnets and 2nm for trawling are completely insufficient to protect these dolphins”.

Based on the surveillance, Earthrace is demanding that the Department of Conservation (DOC) and MPI implement a new Hector’s and Maui’s Threat Management Plan to include:

• Exclusion areas for gill netters and trawlers must be immediately introduced in all areas where these species exist in waters up to 100m deep, and up to 20nm from coastline2
• The number of fisheries inspectors and fisheries inspections within all marine mammal sanctuaries in New Zealand where both species of critically endangered dolphin exist must be increased3
• Fisheries inspections must include those carried out at night.

Earthrace Surveillance Report
Multiple vessels were observed by Bethune and his team well within the Sanctuary fishing right on the limits of the zone.

One gill net vessel was observed fishing outside the four nautical mile area during the day, but was observed passing into the protected area once night fell. The vessel was followed from approximately 3.5nm out to 4.2nm as the gill nets were being pulled in.

Hector’s were spotted by Earthrace on multiple occasions nearby the vessel while it was gill netting, and there is a high risk that some of these will be caught in nets. This is an accident waiting to happen until dolphin protection is improved.

Trawlers were seen fishing within the sanctuary throughout the night, and on multiple days. After dark, on different days, pairs of trawlers ventured within the 2nm exclusion zone.

On one occasion, there were Hector’s dolphins around the kayak as two trawlers passed within 200 metres of the Earthrace observers right on the 2nm limit.

The two vessels were extremely close together and Earthrace observers suspect that they might have been ‘pair-trawling’ which is illegal. Pair trawling involves two boats towing one net between them. This makes it possible to trawl faster, and nets are usually larger, which means a higher risk for dolphins.

On this particular occasion, on approaching the pair of trawlers in a second observation vessel – a motor boat - both trawlers exited the area at high speed, with one skipper hiding from the Earthrace cameras behind a door.

Official observers have only been placed on trawlers fishing during the day within this area, and then only on less than 3% of the total trawler fishing days. Despite several reports of Hector’s dolphins caught by trawlers – including observed vessels – MPI have failed to put in place an adequate observer programme for trawl fisheries.

Scientists from NIWA and Otago University estimate that gillnets kill 23 Hector’s dolphins each year off the east coast of the South Island, with a similar number caught in trawl nets.

It is rarely if ever that observers are placed on board fishing vessels at night, despite previous evidence and the evidence observed by Earthrace during this surveillance that it is highly likely that trawling at night does catch dolphins.

Fines high so reports of by catch are rare
Pete Bethune explains that his brother, an ex-commercial fisherman, worked on a vessel that caught numerous Hector’s dolphins, and none were ever reported to DOC or MPI, as required under the law.

According to him, the industry is cloaked in secrecy over these dolphins. Bethune said, “If you gill net in an area where they are prevalent, you will definitely catch them, but because your livelihood depends on continuing to fish in such areas, and the fines for by catch are so high, you never report them to officials.

“My brother has been on board a vessel that caught five dolphins in one day that were thrown back dead and not reported. The skipper is hardly going to home and tell his missus about it, let alone tell MPI (Ministry for Primary Industries) officials who may determine in the future where he can and cannot fish”.

“Our government sat back and watched Maui’s dolphin numbers drop to a level where their extinction now appears highly likely. Hector’s dolphins are heading the same way unless we halt their capture by gill netters and trawlers right now. One has to ask whether New Zealand’s commercial fishing interests4 are being prioritised over the extinction of our few remaining endemic dolphins.”

Earthrace Conservation has passed the observation information from its surveillance, and the names of the vessels observed, to MPI and asked them to seize the GPS tracking data to verify observations of the gill net vessel and the trawlers fishing illegally within the 4 nautical mile exclusion zone with a view to imminent prosecution.

B roll can be downloaded here

Photographs for media use can be downloaded here

Media notes
Surveillance was carried out by Earthrace Conservation as follows:
• Team of ten; 3-13 January 2013
• Observers on hilltops of Banks Peninsula
• Aerial flights over the area
• Kayak out to 5nm (often travelling up to 30km a night); motorized vessel out to 5nm (supplied by Blackcat Cruises http://www.blackcat.co.nz/)

Hector’s dolphins are the smallest and one of the rarest marine dolphin in the world. Females don’t breed until they are 7-9 years old and only give birth to a single calf every 2-4 years. With a life span of up to 20 years, mothers can only raise a small number of calves. Maximum population growth for this species is a mere 2%. This means that a population of 100 can increase only by two individuals a year.

According to New Zealand Forest and Bird, “Hector's dolphin deaths from fishing must be zero to ensure the species' survival”. http://www.forestandbird.org.nz/what-we-do/campaigns/havens-...

1. Dr Liz Slooten is an Associate Professor in the Zoology Department at Otago University and the foremost authority on Hector's and Maui's dolphins. She teaches ecology, statistics, risk analysis and an MSc course on marine mammals. Her research on Hector’s and Maui’s dolphins started in 1984 when she and Dr Steve Dawson started their PhD research. Since then they have supervised several more MSc and PhD projects on the species. Their long-term research programme has produced more than 100 peer-reviewed scientific publications. Dr Slooten represents New Zealand at the Scientific Committee of the International Whaling Commission. http://www.hectorsdolphins.com
2. This has also been the request from the Scientific Committee of the International Whaling Commission, IUCN (after consulting with their Cetacean Specialist Group), and the NZ Marine Sciences Society
3. There are currently seven fisheries officers’ positions. However only five are currently filled. They are responsible for a huge area, including part of the west coast. Given Earthrace had a crew of ten people in their surveillance mission, MPI appears well understaffed to adequately patrol such a vast area during the day, let alone at night as well.
4. Fishing industry in New Zealand: http://www.mpi.govt.nz/fisheries/commercial New Zealand’s seafood industry sustainably harvests about 600,000 tonnes from wild fisheries and aquaculture each year. The value of this harvest ranges from $1.2 to $1.5 billion per annum, of which the aquaculture industry contributes about $200M per annum. Seafood exports consistently rank as New Zealand’s fourth or fifth largest export earner.