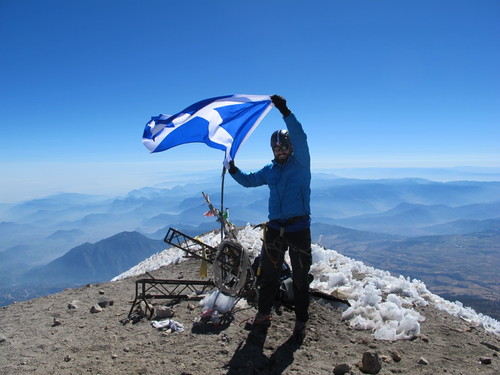 Working for the Red Cross is a huge privilege, as it gives me the opportunity to support the most vulnerable people

PORT-AU-PRINCE, HAITI, JANUARY 29, 2013 – Scottish Adventurer & Aid Worker Ricky Munday, 36, today announced that he is making final preparations to participate in the inaugural Haiti Ascent Mountain Bike Stage race, to take place over 2 days on 1st & 2nd February 2013. For the 75 bold riders, Mountain Bike (MTB) Ayiti combines a once-in-a-lifetime cultural immersion experience with the opportunity to build the foundation for a sustainable adventure tourism industry in Haiti. In doing so, they will race an insanely challenging course through some of the most rugged and awe-inspiring terrain in the Western Hemisphere, in a country that also ranks as the poorest in the Western hemisphere. The event is organised with the ultimate goal of developing mountain biking in Haiti through local, microenterprise Haitian businesses.

MTB Ayiti is part of a series of planned Haiti Adventure Races, which will include an ultra-marathon, triathlon, and other sporting events. These events will help establish Haiti as a world-class destination for adventure travelers interested in mountain biking, hiking, surfing, diving, and other trail and water-based adventure activities. More importantly, these events will directly influence the local economy through tourist dollars being spent on food, lodging, equipment, goods and services. Developing the fledgling tourism sector has become a key priority for the Government of Haiti, 3 years after the devastating earthquake that killed over 300,000 people.

Munday has been on mission in Haiti with the Red Cross since July 2012, but has had limited opportunity to train specifically for the event, due to security restrictions and professional responsibilities. However, he does have an exceptional adventure
pedigree, and in December 2012 he climbed Pico de Orizaba (5,363m) in Mexico, North America’s 3rd highest peak, as part of his long-term Triple 7 Summits project. Munday explains:

“ Working for the Red Cross is a huge privilege, as it gives me the opportunity to support the most vulnerable people . However, life as an aid worker is extremely stressful as workloads are very high, you are separated from loved ones for extended periods and you often live in insecure situations. It’s extremely important to have some work:life balance and an event like this not only benefits the local economy, but also benefits the participants. I am inspired by the concept of MTB Ayiti and I jumped at the chance to be a part of something unique. Haiti has some fantastic natural landscapes and building a sustainable adventure tourism industry around that would be a huge boost to the country as it attempts to develop a stronger economy. There are a number of professional riders taking part in this event, so it will be a great learning experience for me. Normally, I climb mountains on foot, rather than ride up them on a bike!”

Munday has worked in humanitarian aid since 2008, and has previously been on mission in Kenya, Sudan, Bangladesh & Pakistan. In 2004, Munday completed the ‘toughest footrace’ on earth, the Marathon des Sables, where he had to run 220km in 6 days through the Sahara desert in temperatures up to 48 C. Since 2005, he has planned and completed mountaineering expeditions to 9 countries on 5 continents. He is currently planning the South America 3 Peaks expedition to Chile & Argentina in December 2013. He plans to climb Mount Everest in 2014. During his Triple 7 Summits project he is attempting to climb the 3 highest peaks on every continent, a feat that has never been completed.