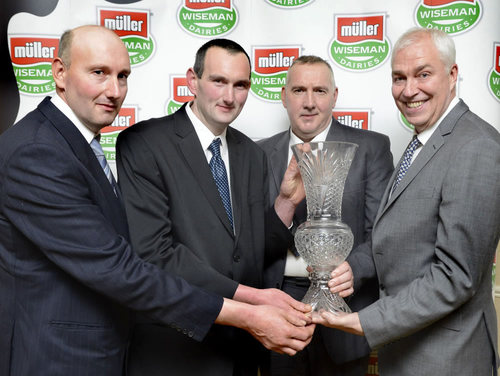 Beating off competition from over 1100 dairy farms across the country, the three brothers collected their award from Müller Wiseman Group Operations Director, Martyn Mulcahy at the awards at the Forest of Arden Hotel on Thursday 6th December.

This year the awards were divided into two categories based on production volumes to take account of the scale of the production on the farms across the Müller Wiseman Milk Group. Coed Mawr Farm, who supply milk via Müller Wiseman to the Co-operative Group as members of the Co-operative Dairy Group, were the overall winners as well as topping the list from the below 2 million litres per annum category. From the category for larger farms were Andrew & Bill Higgins of Wilderley Hall Farm near Shrewsbury for the second year running.

The awards are decided on the basis of milk quality performance across the year including scores for bactoscan, somatic cell counts, protein and butterfat levels and as well as the farms carbon score being factored in.

“The Milk Quality Awards are all about celebrating and rewarding excellence amongst the Müller Wiseman Milk Group. This year has been particularly challenging not least with the exceptional rainfall experienced over the summer but as ever competition was fierce amongst all the members. David, Alan and Neil are very deserving winners of the top award with their herd generating some exceptional production figures this past year.”

“Winning the milk quality award has come as something of a surprise but we are absolutely delighted that our hard work has been recognised with this title. To come out as the best farm amongst over 1100 members of the Müller Wiseman Milk Group is something we are extremely proud of.”

“We are delighted to see a member of the Co-operative Dairy Group winning such a prestigious award against such strong competition. The Pryce brothers are first class farmers and we are exceptionally proud to work with them as members of the CDG.”

This press release was distributed by ResponseSource Press Release Wire on behalf of Muller Wiseman in the following categories: Food & Drink, for more information visit https://pressreleasewire.responsesource.com/about.