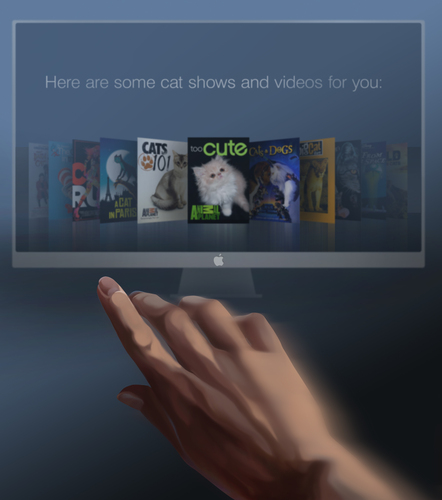 The UK’s largest discount voucher codes website has teamed up with a patent expert to reveal what the new Apple TV, rumoured to be called the iTV, may look like. The concept images that have been created are not just guesses based on rumours – hours of research have gone into the designs, including investigating patent offices in America to see what Apple has registered.

Four concept designs were commissioned by the new tech and gadgets money saving team at www.MyVoucherCodes.co.uk after seeing an increase in the number of searches for the term ‘Apple TV’.

Four images in total have been created, including the following:

Apple TV Remote
This is a touch based Apple TV remote that uses Siri. You just tell the remote what you'd like to watch and it gives you what you want.

Apple TV Shows
The person is using gesture based control to select a show or video based off Siri's results. These results are personalized and only show things that you can watch immediately.

Apple TV iPhone
This is an iPhone app that automatically comes with the purchase of the Apple TV. So, if you don't want to use the physical remote, you can just use your phone. It does the same things as your remote, just on your phone.

The images can be found on the MyVoucherCodes.co.uk blog.

Mark Pearson, Chairman of MyVoucherCodes.co.uk, has said the following:

“We’ve already seen a lot of interest on-site for consumers looking for information on the Apple TV. It’s clear from this that it’s a product a lot of people would like to see and, with limited information out there at the moment, we wanted to do our own research in order to give people a sneak peak at what this gadget may look like.

“Our research has shown that Siri will potentially play a big part in the TV offering from Apple, should it eventually be announced and released. It’ll be interesting to see, if the device does eventually come about, what it will look like and what features it’ll offer for the user. I think it’s only a matter of time before we see Apple playing a bigger part in the home entertainment sector.”