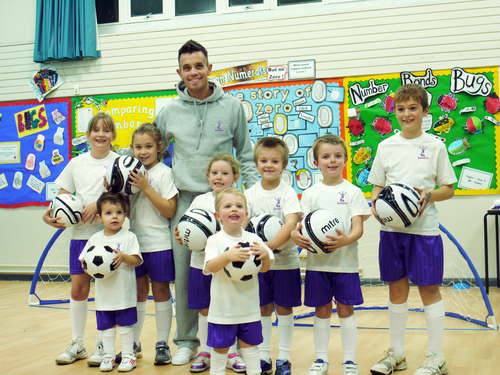 Former Aston Villa star Lee Hendrie is set to launch a national network of inspirational football sessions for children which he says will help show the ups and downs of the Beautiful Game.

The fun sessions will help children build confidence, self-esteem and friendship but will also offer opportunities for those showing real promise to be spotted at a tender age.

Father-of-two Lee, 35, who now plays for Tamworth, has led development of the FootieBugs (www.footiebugs.com) activity programme which is being rolled out as a pilot scheme in selected areas of the Midlands, South and North.

FootieBugs is a professional football activity session programme for children aged three to nine, offering fun classes teaching fundamental football skills. One of the most important and exciting aspects for Lee, is that sessions can be enjoyed by girls and boys as well as encouraging friendship and respect among children from different ethnic backgrounds.

It’s also hoped that youngsters’ involvement in football can have a positive effect on their communities and parents are also encouraged to get involved.

But Lee also says that learning you can win or lose a game of football from the age of three will be a boost for those youngsters with their sights set on a future in the sport – and that if he’d been able to have such experience, he would have approached the game differently.

“With all my experience playing at the top flight of football, I’ve a lot to give,” he says.

“As a professional footballer and a dad, I was confident I could put an excellent football programme for children together, but I wanted it to be more than just teaching children core football skills.

“I wanted to make a difference and help educate children and their families into the importance of a living healthily and how it can affect their child’s sporting potential. I wanted to help prepare children physically and emotionally for the life ahead of them and so by utilising the expertise of early year’s educators, physiotherapists and other professional footballers, I have developed an all round professional football programme that has as much emphasis on fun as it does on fundamental football skills.”

“I’ve spent over 12-months developing the programme by researching how football could address a number of issues currently affecting young children.

“I’ve spent time talking to physiotherapists from clubs that I have played for, I contacted my children’s head teacher as an early year’s specialist and I researched the opinions of parents as to what was important to them for their child’s development and their expectations from a children activity.

“I also sought advice from Gareth Barry and Joe Hart of Man city, Ashley Young of Man Utd and Gary Cahill of Chelsea with regards to the core skills of football, teamwork and the mental strength of teamwork, social skills and interaction with others to ensure I was on the right track.

“I want to pass on the best skills I can, including passing the ball, heading and shooting, all the things that make a complete footballer.”

Lee has worked with expert physios and childcare professionals to painstakingly prepare a structured activity programme, as part of The Bugs Group, which also includes YogaBugs, the largest and most successful children’s yoga specialist with operations throughout the UK, Australia, China and Singapore.

“I want to help kids who want to be footballers reach their goal, I wanted to be a footballer from a young age, I worked through similar stuff myself and got rewards from it.

“Who knows, we may find the next Wayne Rooney and I’m really excited about the chance to help them but it’s also about having fun and children developing vital social skills through football.

“It’s important that this is a mix of boys and girls. Girls’ football is brilliant now in the UK and I want to help both boys and girls become the best players they can be.

“If we see someone who stands out, we want to encourage them as much as possible. We want to speak to Premiership and Championship clubs about the talent we find.”

Along with Bugs Group managing director Mark Goode, Lee is now spearheading a search for franchisees to pioneer the FootieBugs programme in the chosen regions.

Lee says: “Although football is my passion and I have been lucky enough to make it my career, not everyone has had the same opportunities. I am so excited to be able to offer others with the same passion a chance to make a real difference to the future footballers of this country.

The wealth of experience and passion that Lee and other professional players have been able to bring to the FootieBugs programme is what he believes will set it apart from established competitors.

But Lee adds: “Although FootieBugs attracts a large number of leading premiership and championship players, most of whom I have had the pleasure to play with or against; it’s the franchise owners and their team of coaches that will ensure FootieBugs remains top of the league.”

* Anyone wanting to find out more about becoming a FootieBugs franchisee should contact Kim at The Bugs Group on 0121 777 7792 or via kim@thebugsgroup.com.

This press release was distributed by ResponseSource Press Release Wire on behalf of The Marketing Room in the following categories: Children & Teenagers, Sport, Business & Finance, for more information visit https://pressreleasewire.responsesource.com/about.