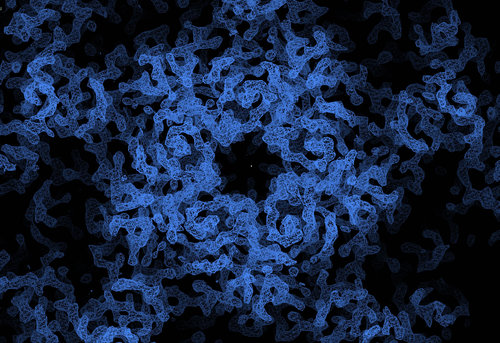 The UK’s national synchrotron facility, Diamond Light Source, is now the first and only place in Europe where pathogens requiring Containment Level 3 – including serious viruses such as those responsible for AIDS, Hepatitis and some types of flu - can be analysed at atomic and molecular level using synchrotron light. This special light allows scientists to study virus structures at intense levels of detail and this new facility extends that capability to many viruses that have a major global impact on human and animal health. Studying pathogens in this way has the potential to open up new paths for the development of therapeutic treatments and vaccines.

Presenting at the American Association for the Advancement of Science (AAAS 2013) in Boston on the latest virus work undertaken at Diamond, Prof Dave Stuart - Life Sciences Director at Diamond Light Source and Professor of Structural Biology at Oxford University - launches the new lab,Crystal, which will help scientists delve into the inner workings of pathogens and uncover the mechanisms of infection. Prof. Stuart comments:

“Crystal provides unique facilities in Europe for the study of serious viruses. Nowhere in the world can structures be so readily solved with the speed and efficiency that is now available at Diamond. As such, we anticipate interest from a number of groups in the UK, including the Particle Imaging Centre in Oxford, which provides a suite of contained laboratories including a crystallisation laboratory, to support the preparation of sample prior to study at Diamond. This is great news for the UK research community, as the facility will be a resource with the potential to provide new pathways for treatment.”

Diamond, already has a strong track record of studying viruses at lower levels of containment. In 2012, scientists determined the structure of the virus that causes hand-foot-and-mouth disease, which can cause severe central nervous system disease in children and poses serious public health threats across the Asia-Pacific region. Some 1.7 million cases were reported by the Chinese Ministry of Health during 2010, and there is no vaccine or therapy available.

An Anglo-Chinese collaboration used the facilities at Diamond to solve the structure of the Human Enterovirus 71 (EV71), which is the root cause of the disease. Using synchrotron light, the team were able to visualise the virus in different states and collect a series of structures, from which they were able to uncover a detailed picture of the virus’s actions in sequence - rather than being a rigid object, the virus appears to actually “breathe”. Such visualisation requires specialist microscopes ten thousand times more powerful than standard laboratory microscopes.

“Together with our Chinese Colleagues, we have now uncovered the structure of EV71 and identified the process by which the virus spreads throughout cells in the human body. These findings can now be used to develop new treatments for hand-foot-and-mouth; and also directly translated to other viruses of the same family, including polio and some forms of the common cold.”

The solving of hand, foot and mouth virus demonstrates the potential impact that the new capabilities could have. Crystal at the Diamond synchrotron enables researchers to rapidly visualise viruses in their entirety and at incredible scales. The facility’s brilliant beams of X-rays allow scientists to study crystallised virus particles, and so produce a comprehensive 3D image of the virus structure. By identifying the virus structure in atomic detail, scientists can target research into vaccines and anti-viral drugs.

The facility is the only one of its kind in Europe and one of only two in the world. Dr Katherine McAuley, science leader for the facility concludes, “Crystal is a major advance, not just for the UK, but for Europe at large. Given the groundwork that has been performed at Diamond so far on viruses like the hand-foot-and-mouth, we are introducing a step change in research capabilities, so that more complex studies can be undertaken in a swift and effective way. The unique capabilities that the facility offers are expected to draw scientists from around the world, and establish the nation’s synchrotron as a hub of world-leading research into disease prevention.”

Supporting images and animations can be viewed and downloaded at ftp://ftpanon.diamond.ac.uk/AAAS2013

About Diamond Light Source
• Diamond Light Source is funded by the UK Government via the Science and Technology Facilities Council (STFC) and by the Wellcome Trust.
• For more information about Diamond visit www.diamond.ac.uk
• Diamond generates extremely intense pin-point beams of synchrotron light of exceptional quality ranging from X-rays, ultra-violet and infrared. For example Diamond’s X-rays are around 100 billion times brighter than a standard hospital X-ray machine.
• Diamond Light Source is used by over 3,000 academic and industrial researchers across a wide range of disciplines including structural biology, health and medicine, solid-state physics, materials & magnetism, nanoscience, electronics, earth & environmental sciences, chemistry, cultural heritage, energy and engineering.
• Many of our everyday commodities that we take for granted, from food manufacturing to cosmetics, from revolutionary drugs to surgical tools, from computers to mobile phones, have all been developed or improved using synchrotron light.
• Diamond brings benefits to:
o Biology and medicine. For example, the fight against illnesses such as Parkinson's, Alzheimer's, osteoporosis and many cancers will benefit from the new research techniques available at Diamond.
o The physical and chemical sciences. For example, in the near future, engineers will be able to image their structure down to an atomic scale, helping them to understand the way impurities and defects behave and how they can be controlled.
o The Environmental and Earth sciences. For example, Diamond helps researchers to identify organisms that target specific types of contaminant in the environment which can potentially lead to identifying cheap and effective ways for cleaning polluted land.