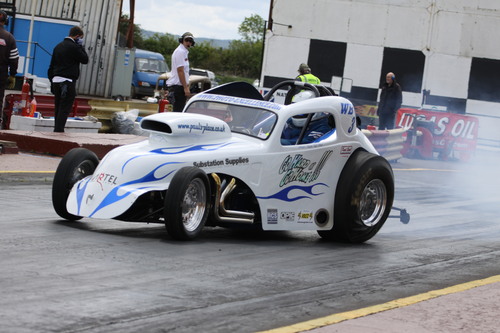 Can it just be a coincidence that in both the previous years, featuring Voltz, we have secured first place

Now in its third year, VOLTZ INTERNATIONAL will once again be fuelling “Team Gridlock” in their aptly named “Go Hard or go Home” multi championship and award winning Fiat Topolino Bodied Competition Altered Dragster at Shakespeare County Raceway, Warwickshire and at Santa Pod, Northamptonshire, starting at Easter with the Festival of Speed.

British No. 1 Wild Bunch Nostalgia Drag Racing champions secured 1st place in their last two years and positively expect to return to glory in 2013. Their 25-year old driver, Adam Price, says “Voltz Energy Shots are a great boost to a tiring day at racing. Concentration has always got to be 100%, as if anything goes wrong, things can happen very fast, so you need to be sharp. Can it just be a coincidence that in both the previous years, featuring Voltz, we have secured first place”?


The dragster runs a naturally aspirated small block Mopar engine, which Team Gridlock confidently believe to be the fastest and quickest N/A SBM in the UK.

Such is the public’s insatiable demand for punishing motor sports, that Team Gridlock will be featured in this summer’s filming schedule with Crews VS on Sky Sports Motors TV.

Note to Editor: VOLTZ International Ltd is the exclusive global distributor of the Voltz energy health shot, which is manufactured in the UK. Robert Arnold, MD of Voltz International Ltd says “Team Gridlock have my unequivocal support & I’m looking forward to continued & outstanding racing this season".


VOLTZ also supports & is associated with:-