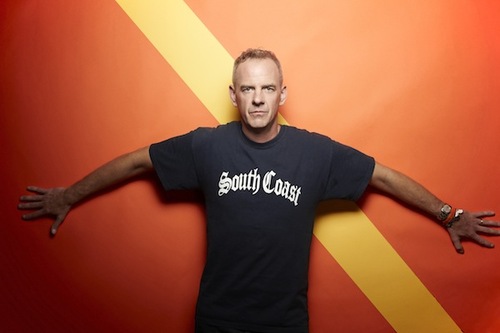 Fatboy Slim aka Norman Cook is to be honoured at The IMS Legends Dinner at the sixth International Music Summit in Ibiza… The DJ and producer, who recently announced he is to be the first DJ to ever perform at The House of Commons, will have his long-standing career celebrated at an intimate dinner party put on by the IMS. He will then go on to host an exclusive free party at the UNESCO world heritage site Dalt Vila – Fatboy Slim & Friends - with pals Pete Tong and DJ Driis (Idris Elba - The Wire / Luther) on May 23rd.

On news of receiving this award, Norman said "It’s a huge honour to follow Carl Cox and Pete Tong and be the third recipient of the IMS LEGENDS AWARD. Despite the award title, I am still very much alive and kicking! Ibiza has been a pivotal part in my life and my career and so there is nowhere better than there to receive it. I am looking forward to an evening of looking back but mostly looking forward as I'll also be performing at the fort of the Dalt Vila World Heritage Site for IMS. Ibiza is known for its highs, but this will be the highest location I've ever played from on the island! Expect the summer to start with a smile!"

An artist that thrives on a great party coupled with a passion for performing in unique places, Fatboy Slim has DJed in some unique settings – from the closing ceremony of the Olympics, to playing on the Great Wall of China to the mega event that is Carnival in Brazil. Big Beach Boutique goes from strength to strength after 2012's 44k people event at the Amex stadium, 80k people on a beach in Brazil, June see's its 5th anniversary on a beach in Tokyo. A forthcoming headlining slot at the Ultra Music Festival in Miami next month, and his yearly pilgrimage to Glastonbury imminent, the IMS feel that this accolade is very much deserved.

Fatboy Slim & Friends will see Norman play host to an incredible line up, which includes Pete Tong (co-founder of the IMS), along with DJ Driis (Idris Elba) who since his recent documentary on Channel 4 – How Clubbing Changed the World, has been concentrating on his DJ career with a residency called Love & Liquor in West London. Other artists to appear on the night include Hot Since 82, Kaz James, and Tom Staar. The event is free, with the first 500 people to buy a ticket on the IMS website for the IMS Grand Finale on Friday 24th May receiving an automatic invite to Thursday night’s party.

The IMS events are firmly cementing the International Music Summit’s reputation for putting on some of the most exciting and diverse line-ups the island has seen. With the Grand Finale line up consisting of Tensnake and Le Carousel playing live and DJs Sven Väth, Maya Jane Coles, Solomun and Scuba providing the soundtrack to the evening, and with more events to be announced, it’s easy to see why the 3-day festivities have seen thousands flocking to the island to be part of this dance music weekender. Having been a supporting partner of the summit since its inception in 2008, Pioneer will also be returning as sponsor of the IMS.

The Ibiza International Music Summit (IMS) presented by dance music legend Pete Tong, is now revered as one of the world's most important music industry gatherings in the world. IMS signals the beginning of the Ibiza season. It is both a high level music industry conference attended by the global industry leaders in the dance music scene, alongside a week of the most aspirational dance parties on the island - the official launch of the Ibiza season:

• A captive audience of the global dance music industry's most important decision makers
• A platform for labels, agents, managers and brands to debate, announce and explain
new initiatives and strategies music to the industry
• A forum for music technology collaboration and creation - where the biggest minds in
music come together to create new dance music apps, exclusive remixes, and music
technology trials
• A live music showcasing opportunity for the newest breakthrough artists and record labels
• The official "consumer" opening of the Ibiza Season with the 2 night IMS Gran Finale at
Dalt Vila - a UNESCO world heritage site. Featuring the biggest global talent in the world,
pushing the envelope for DJ and live performances.

No stranger to music, Driis has produced and performed under various monikers over the years. In 2006, he released the critically acclaimed Big Man EP, followed this with tracks featured on Prom Night and Tyler Perry’s Madea Goes to Jail soundtrack, and then in 2008 Driis received the ultimate industry co-sign when he was selected out of hundreds to produce the intro for Jay Z’s seminal American Gangster LP.

With this under his belt, Driis set task to define a sound of his own. He holed up in the lab with a variety of producers: 9th Wonder, Vitamin D, and Klasix, to name a few. The outcome — ‘King amongst Kings’ — A fusion of sounds that reflect Driis’ eclectic influences: rare groove hip-hop and lovers rock beats under vocals that are uniquely Driis.

Excited at the prospect of sharing his new music, he is keen to get on the road. And it’s at this exciting point in his musical journey that Hevlar Records invites you along for the ride. So buckle up, sit back and open your mind to the sounds of Driis: formidable DJ, talented producer, emotive lyricist, and intuitive vocalist. Coming to you in the days, weeks, months, years to come.