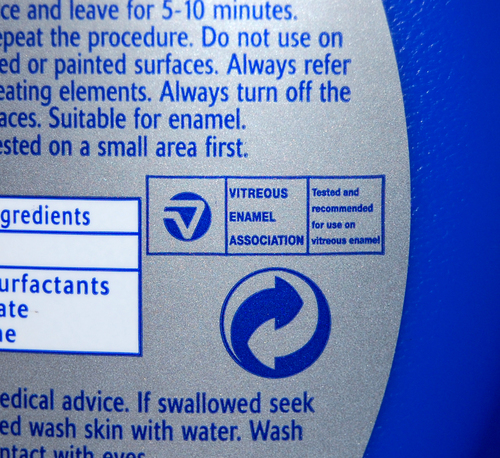 On a mystery shopping exercise the VEA purchased twenty cleaning products which had not been submitted to the VEA for testing. (See: 'Independent Testing' below)

In the VEA cleaning tests on kitchen and bathroom enamel with these twenty products previously not listed, none reached the VEA top 'AA' standard. On ovens only six reached an 'A', four a 'B' and four a 'C'.

On hobs there were ten at 'A', and three on 'B'. Across a total of eight cleaning products tested on bathroom enamel, most scored 'A', three were 'B' and three were 'C'.

The message is clear.
----------------------------
Vitreous enamel will last a lifetime and longer especially if cleaned with suitable products. However it can be damaged and to avoid using the wrong cleaning product on vitreous enamel, the VEA invites everyone to check with the freely available list of Approved Enamel Cleaners on the VEA website at: www.vea.org.uk

Speaking on the publication of the results, Chris Taylor of the VEA said, "Expensive kitchen and bathroom equipment can be damaged with the wrong enamel cleaners, especially some of the modern very corrosive cleaners. We want to avoid that happening. Shoppers can be certain that products the VEA has tested and listed as 'Approved' when used as instructed will do their job without damage. For some other products that is not the case and when the damage is done, it is too late. We hope everyone avoids damaging their vitreous enamel and The VEA Website lists Independently Tested and VEA Approved Enamel Cleaning Products, which can help."

Each has a different performance depending on its use as a bath, or cooker, or hob, or an oven enamel.

Test panels are dirtied with standard contaminant made to exactly the same formula for every test.

Each cleaning compound is poured on to the pad of a surface abrasion testing machine.

The machine runs for a pre-determined time for each sample.

Every cleaning compound is tested on every type of enamel to assess how it affects each when-used to the instructions of the cleaner manufacturer and also when used incorrectly.

Once a cleaning product has been tested on the surface abrasion testing machine each enamel sample panel is minutely examined for cleaning effectiveness of the product and any enamel damage.

Details are recorded for each cleaning compound on each of the different samples whether for the outside of a cooker or the inside if an oven or a bathroom surface.

The VEA publishes lists of independently tested and Approved cleaners at www.vea.org.uk in its list of Approved Enamel Cleaners.