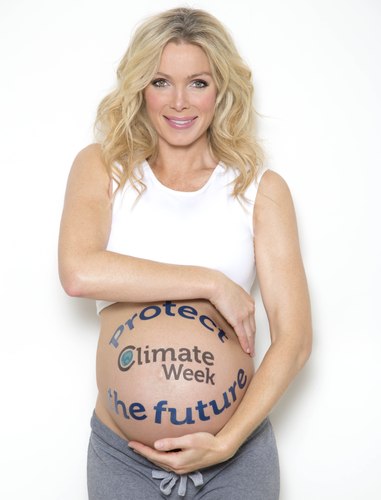 The campaign launches today as part of Climate Week (4-10 March), Britain’s biggest environmental occasion, with over half a million people expected to attend 3,000 events across the UK. Supporters include Britain’s Got Talent judge Alesha Dixon and the Prime Minister, David Cameron.

Another supporter, model, fitness guru and mother Nell McAndrew, eight months pregnant, had the words “protect the future” written on her baby bump. She said "Becoming a parent makes you realise how important it is to protect the planet for future generations, and that's why I'm supporting Climate Week."

Pregnant campaign supporter Vanessa Doman had her bump painted as a globe damaged by oil, showing that to safeguard the next generation from climate change we must use less fossil fuel.

New research1 for Climate Week by Ipsos MORI shows that parenthood is a powerful trigger for concern about green issues - 66% of mothers and fathers said that becoming a parent made them feel more strongly about protecting the environment. Climate Week – Protect the Future is backed by the UK’s largest charity for parents, NCT, and by Family Lives, a charity which helps over a million children each year.


People can publicise the campaign by taking a photo of themselves displaying the words “Climate Week - Protect the Future” and making it their Facebook or Twitter photo during Climate Week.

Kevin Steele, Chief Executive of Climate Week said: “The campaigning of parents during Climate Week is helping it to be Britain’s biggest climate change campaign – an occasion when everyone can explore ways to live and work more sustainably.”

There are lots of other Climate Week activities – for example for schools, workplaces and community groups. People can take part in Britain’s biggest environmental competition, the Climate Week Challenge. They can also run a Climate Week Swap event for people to exchange clothes and children’s toys they no longer want for great stuff that they do. For more ideas and information, visit www.climateweek.com, email info@climateweek.com or call 020 3397 2601.


About NCT
NCT is the UK’s largest charity for parents. Each year the charity supports hundreds of thousands of parents through the transition to parenthood, offering expert information and trusted practical and emotional support through its website, helpline, a nationwide network of 300 local branches, antenatal and postnatal classes, breastfeeding counselling and peer support schemes.