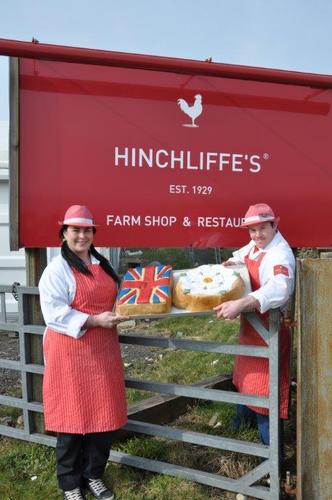 Award-winning pie maker Hinchliffe’s Farm Shop is flying the flag for great British pork pies this week – cooking up two giant-sized pies in the shape of the Yorkshire Rose and the Union Flag!

The colourful crusties – which have been painted in edible yellow, white and green paint for the Yorkshire Rose and red, white and blue for the Union Flag – have been made to celebrate British Pie Week, which runs from March 4-10.

Unveiled at Hinchliffe’s Farm Shop in Nertherton, Huddersfield, at noon today (Monday March 4), the pies are the creation of top pastry maker Nell Weavill, who dishes out 1,000 pies a week at the shop and made a name for herself in 2012 when she created a giant York Minster out of pork pies – or ‘Pork Minster’ as it was dubbed – for Yorkshire Day.

Pie mistress, Nell Weavill, swapped body art for the art of baking when she started at Hinchliffe’s three years ago. Formerly a tattooist and body piercer, bakery supervisor Nell decided pies and pasties rather than pigment and piercings was where her heart lay! And she’s done an extraordinary job in that time, overseeing all baking activities at the farm, planning and sourcing recipes and managing a growing department that has expanded four-fold since she started.

“Fresh, seasonal and local ingredients are what makes great pies – that and a little bit of love!” says Nell. “I fell out of love with piercing and into love with pies!”

Hinchliffe’s master butcher, Craig Midwood, who has been at Hinchliffe's since he was 15 and in that time has scooped the Pork Pie Appreciation Society’s top award of UK Pork Pie Champion six times, says the patriotic pies represent all that’s best about British pies. “Only 100 per cent British ingredients go into our pies. Customers have that peace of mind when they take a bite that we’ve made all our pies from scratch and know exactly what goes into them from the pastry to the pork – and of course that special ingredient: 100 per cent passion.”