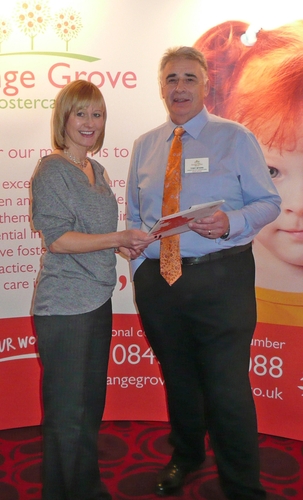 Under Tony’s guidance the company has introduced new IT systems and a complete revision of company policies as well as new ways of working. He feels that he leaves the company well placed to compete in an increasingly competitive market. Children’s safe care and development have been key drivers in everything Tony has done and he is very proud of the Foster Carers’ Charter, Children’s Pledge and Carer Handbook as well as the recent re-brand for the company. Tony comments, “It’s a testing time for fostering agencies but we are in a strong position to move the company forward”. This demanding task will be undertaken by Judith Rees, who joins Orange Grove from Compass Services for Children.

With twenty-three years experience within the sector, Judith began her career as a social worker for the Local Authority before several years with the NSPCC as a Child Protection Officer. It was here that she was able to witness the real difference that good foster care placements can make to at risk and troubled young people.

Following her time at the NSPCC, Judith took a social work position at Pathway, an independent fostering agency. During this time, she completed her Masters in Management, progressing through the organisation before leaving as Welsh Director in 2012. Judith joins Orange Grove from the post of Operations Director at Compass Services for Children, where she was responsible for the integration of staffing structures across the group, company processes and leading on tender submissions. Judith lives with her husband and their two sons in Carmarthenshire, South Wales.

Judith is excited about joining Orange Grove Fostercare, an organisation that she believes is clearly committed to providing a quality service for children, carers and staff. Judith says, “After 13 years in the fostering sector, I know what a difference good foster placements can make for young people, but also how much work it takes to support and monitor those placements”. She joins Tony Myers from 1st March to work alongside him until 5th April. Tony is looking forward to spending his retirement putting all his energy into his many pastimes as well as having more time to spend with his family.