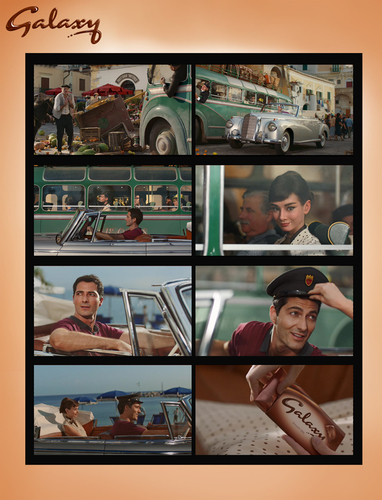 I cannot think of a better assignment. It’s a dream come true. And yes, I love chocolate too!

The stunningly colourful one minute long film shows Nick Hopper driving a silver convertibleMercedes car on southern Italy’s Amalfi coast. Audrey Hepburn is seen on a crowded bus that comes to an unexpected halt when a fruit barrowoverturns in the road. She wonders when she will have time to enjoy the Galaxy chocolate bar in her handbag.

Nick Hopper drives alongside the bus and manages to rescue Audrey Hepburn from her humble stationarybus into his elegantcar. Audrey Hepburn cheekily steals the bus driver’s cap and places it on Nick’s head, turning him into her chauffeur. She gracefully hops in the back and indulgently enjoys her chocolate bar.

As the handsome chauffeur drives into the distance, the classic tag line appears, “Why have cotton when you can have silk?”

The atmosphere of the delightful film is enhanced by the sound track of Moon River, a song composed by Henry Mancini with lyrics by Johnny Mercer. It won an Academy Award for Best Original Song for its first performance by Audrey Hepburn in the 1961 movie, Breakfast at Tiffany’s.

The retro-styled film has the romantic look of many of Ms Hepburn’s films which were avidly watched by Nick Hopper prior to the filming.

The children of Audrey Hepburn, Sean Ferrer and Luca Dotti, said that their mother would be proud of her ‘new role’.

According to Bernice Barrington on the website Business and Leadership, Audrey Hepburn’s sons commented, “Our mother often spoke about her love of chocolate and how it lifted her spirit so we’re sure she would have been proud of her role as the face of Galaxy. The advert perfectly captures her playful spirit and we hope audiences enjoy it as much as they enjoyed her movies.”

Model Nick Hopper added, “I am still pinching myself about the film. It is the best thing I’ve ever done. I cannot think of a better assignment. It’s a dream come true. And yes, I love chocolate too!”

Article by Bernice Barrington for Business and Leadership
http://www.businessandleadership.com/marketing/item/39795-ga...