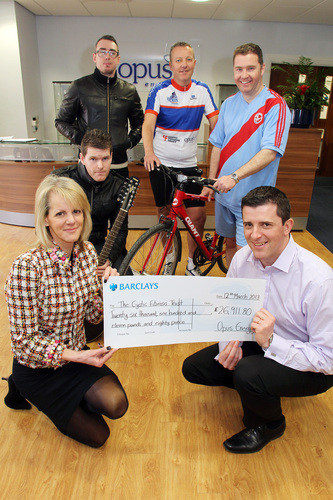 Their phenomenal efforts over the last few years have raised a total of £46,945 for the Cystic Fibrosis Trust

Employees from Northampton-based energy supplier Opus Energy raised £26,911.80 for the Cystic Fibrosis Trust, which they presented to the Trust on Tuesday 12th March at the Opus Energy office on Moulton Park, Northampton.

Four Opus Energy employees who each undertook fundraising activities presented the cheque: Gary, who was one of five employees who completed a bike ride from London to Paris in the summer, raising £4,377; Andy, who took part in a football tournament in February, raising £385; and Chris and Simon from the band Sons Of The Helots, who brought rock ‘n’ roll to Northampton on 8th March at the Opus Rocks charity gig night, raising £828. All funds raised were doubled by Opus Energy.

Gary said: "I encourage anyone that gets the opportunity to take part in the London to Paris Bike ride. Not only will you be raising money for a great cause, and riding with others that are doing the same, but the sense of achievement in cycling 300 miles is a wonderful feeling. Opus Energy was kind enough to give me that chance and I will be forever grateful that they did!"

Charlie Crossley Cooke, Managing Director, Opus Energy, comments: “We are always thrilled to see that our employees are up for a challenge in order to raise money for charity. Their phenomenal efforts over the last few years have raised a total of £46,945 for the Cystic Fibrosis Trust, which the Trust uses towards helping the 75 children and adults in Northamptonshire who are affected by the disease.”

Sue Piper, Senior Corporate Fundraising Manager, Cystic Fibrosis Trust, commented: “We are so grateful to Opus Energy and its staff team, who have put a lot of effort into fundraising and reached this fantastic sum. Support from companies like Opus Energy makes such a difference to people affected by cystic fibrosis. It allows us to push forward with our exciting research plans and drive up the standards of care for people living with the disease.”

Charlie Crossley Cooke concludes: “This is a real benchmark for our collective fundraising efforts for the next year. We have decided to support two charities in 2013/14, and are currently running an office ballot to find a national charity and a smaller charity to support, based on nominations put forward by our employees.”

Visit the Opus Energy Challenge website to find out about the opportunities that Opus Energy offers its employees to achieve personal challenges.

Opus Energy is the UK’s leading business energy supplier. The company was founded by Charlie Crossley Cooke in 2002 and now employs 450 people over its Northampton and Oxford-based offices.

In addition to supplying energy, Opus Energy also purchases power from over 500 renewable generators in the UK which it then supplies to its customers.

The management team has a 50 per cent stake in the business, while GDF SUEZ holds 30 per cent and Telecom Plus Plc has 20 per cent.

About the CF Trust

The Cystic Fibrosis Trust is the UK’s only national charity dealing with all aspects of cystic fibrosis (CF). It funds research to treat and cure CF and aims to ensure appropriate clinical care and support for people with cystic fibrosis.

Cystic fibrosis (CF) is one of the UK’s most common life-threatening inherited diseases. Cystic fibrosis is caused by a single defective gene. As a result, the internal organs, especially the lungs and digestive system, become clogged with thick sticky mucus resulting in chronic infections and inflammation in the lungs and difficulty digesting food.

Further information can be found on our website www.cftrust.org.uk.

Help and advice for those affected by cystic fibrosis is available through our Helpline on 0300 373 1000. For further information, media should contact Louise Banks on 0208 290 7912 or email lbanks@cftrust.org.uk