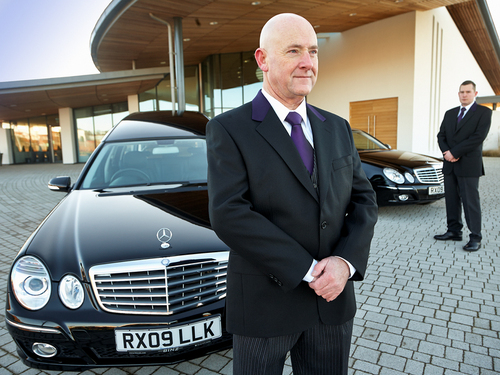 Comprising a full ceremonial outfit for staff, it is the UK’s first recyclable corporate clothing range, created entirely from biodegradable and sustainable sources.

All interlinings of the garments are either derived from viscose or made using 100% recycled PET plastic bottles, and the buttons are made from the Corozo nut, which is found inside a large fruit that grows on the Tagua Palms of Ecuador.

The launch of the clothing range comes after two years of planning and designing, and on the back of a number of innovative green initiatives put in place by Midcounties Co-operative Funeral Group since it began its mission to become a greener, more sustainable business.

These include the introduction of banana leaf and cardboard coffins, an entire programme dedicated to cutting carbon emissions, and becoming the first business in the UK to invest in an all-electric vehicle for its business.

“By introducing this clothing to our business we are making one more step towards contributing to our goal of creating a better and fairer world by trading responsibly.”

Created by Lyn Oakes corporate tailors, who design and manufacture a number of the funeral business’s ceremonial clothing, all of the garments are made using 100% wool sourced from natural, sustainable and renewable sources. Even the dyes and processes used have been evaluated for pesticide usage and waste management, and all adhere to the European-wide ‘Oeko-Tex Standard 100’, which test for harmful substances used throughout manufacturing processes. Lyn Oakes is a local company to Midcounties Co-operative Funeral Group’s headquarters, supporting the funeral business’s sustainable objective of always striving to use local suppliers where possible.

Simon Oakes, Sales Director at Lyn Oakes, said: "We are delighted to have produced this UK first with Midcounties Co-operative. We have sourced all of the cloth from renewable sources, and it is a unique collection that gives the company the opportunity to do their part in looking after the environment every day."

With over 70 local funeral homes throughout the West Midlands, Oxfordshire, Swindon and Gloucestershire areas, The Midcounties Co-operative Funeral Group is the largest funeral director in the region, carrying out more than 8,000 funerals each year.

The Midcounties Co-operative has been named ‘Co-operative of the Year 2012’, recognised for its excellence, innovation and ethics in business by Co-operatives UK.

It has headquarters in Warwickshire, with trading outlets in Oxfordshire, Gloucestershire, Wiltshire, Shropshire, West Midlands, Worcestershire and the surrounding counties.

The Society’s trading groups are food retail, funeral, travel, pharmacy, childcare nurseries, employee benefits and energy. Midcounties is the largest independent co-operative society in the UK and has more than 470 branches and 245,000 active trading members. It is also in ‘The Sunday Times Best 25 Big Companies to Work For’ list for the second year running.

The Society's mission statement is 'To be a successful consumer co-operative working towards creating a better, fairer world, and to enhance the lives of our colleagues, members, customers, and the communities we serve'.