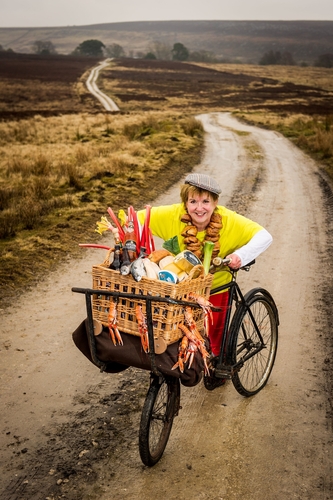 Yorkshire is the only county in England with a larder that betters France for quantity, quality and tradition

It’s not the dales, hills or a picturesque backdrop for the yellow jersey that led Le Tour de France to choose Yorkshire for the start if its 2014 race. Great Yorkshire grub is the reason the world’s biggest annual sporting event is detouring to God’s own county, says Yorkshire Food Finder founder Sue Nelson.

“Yorkshire is the only county in England with a larder that betters France for quantity, quality and tradition. So where else could Le Tour possibly start?” says Sue, whose guided gourmet tour company puts foodies in touch with the county’s top producers and chefs. “We’re the biggest beer, rapeseed, pork and seafood producer in the UK, and when it comes to beer, Yorkshire is a frothy head above the rest with more than 130 real ale brewers producing more than 920 different beers.”

Sue, who is developing a special Yorkshire Food Finder trail around Le Tour’s Grand Depart on July 5 and 6, says, like France, Yorkshire is home to thousands of talented artisan food and drink producers.

“They’re creating fabulous food but without the legendary status enjoyed by producers on the other side of the channel!” says Sue. “Our cheese, for example, is spectacular – think of award winners like Barncliffe Brie and Harrogate Blue – our Givendale and Dexter beef easily give French Charolais a run for their money as do our free-range poultry. Nothing can beat the lamb from Swaledale, Coverdale and the Wolds, or hoggets reared on the Howardian Hills, not to mention the PDO Yorkshire Forced Rhubarb, or Red Grouse and liquorice!”

Yorkshire Food Finder has 30 artisan food trails available for 2013 featuring a selection of these fabulous foods and award-winning producers. It will be developing a special trail for Le Tour traversing the spectacular scenery of the North Yorkshire moors and coast, the Dales and David Hockney’s beloved Wolds of East Yorkshire.

• Le Tour de France and Le Grand Depart. The Tour de France is one of the world’s top global sporting events attracting a TV audience of over 3.5 billion over the three-week, 3,500km cycle race around France and surrounding countries. Teams and riders from around the world are expected to stay up to five days in Yorkshire for the two-stage Le Grand Depart.
• Yorkshire Food Finder trails start at £95 per person including transport, tour and either lunch or dinner. The trails are designed for a maximum of 12 people and last between six and 10 hours. Bespoke trails for private groups as well as incentive, team building and corporate entertainment can also be arranged. Trails are ‘hubbed’ around a top restaurant with signature feasts by chefs Andrew Pern at The Star Inn, James Mackenzie at the Michelin-starred The Pipe and Glass, Tim Bilton at The Butchers Arms and Ben Cox at The Star @ Sancton.
• For serious foodies and professionals, there are skills-based trails with opportunities to learn charcuterie, butchery, fish smoking, cheese and ice cream making, as well as cookery master classes.
• Bridlington is the biggest shellfish port in Europe by tonnage and there are more pigs than people in East Yorkshire, one of biggest producers in Europe.
• Like France, Yorkshire nurtures an eco-system of small artisan food and drink producers with the UK’s highest concentration of small producers, creating fabulous products with fewer than 50 employees.
• Over 1,100 companies make up Yorkshire’s food and drinks industry, employing around 55,000 people.
• Sue Nelson is available for interview – please see contact details below

For more information or to interview Sue, please contact: