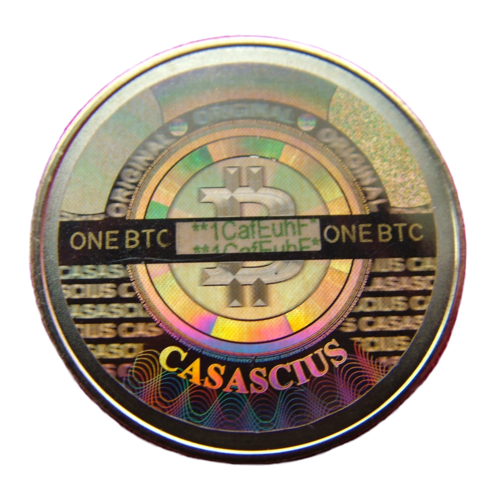 These are the real McCoy; Genuine Casascius BitCoins

Ethos are always at the forefront of cutting-edge technologies and so they are now accepting BitCoins as a new payment option for their revolutionary and cutting-edge health, sports and nutrition products including their; Bright Eyes Drops eye drops for cataracts which were featured on the Richard & Judy TV Show trials, Ethos Marine Phytoplankton, Ethozyme, Ethos Endymion Sport™ and ASEA™.

ASEA™ is the very latest addition to their unique range of Ethos Healthy Lifestyle products and it is a major medical breakthrough which, for the first time ever, enables the successful delivery of Redox Signalling Molecules in a health supplement drink. ASEA™ is a game changer and category creator; it is not a nutritional supplement, vitamin supplement nor mineral supplement. It is a unique and patented formulation for health and well-being and the only source of Redox Signalling Molecules outside of the human body. Clinical studies have clearly shown a 12% increase in the time taken to reach Ventilatory Threshold which is the point in your workout when your body finds other energy sources because it can no longer bring in enough oxygen to fuel your muscles. After only two weeks of supplementing with ASEA SPORT™ Some athletes increased their power output and endurance by over 30%! - ASEA Redox Signaling Molecules

Get The Edge & Reverse The Damage with Ethos Endymion Sport™

BitCoins, with the currency symbol BTC, are a revolutionary new digital currency that you can use online and in an ever-growing number of retail outlets worldwide. Transaction fees are far less than those of all conventional payment processing methods like Visa and MasterCard etc. and are totally secure. Anyone can set up a free BitCoins eWallet and immediately start enjoying the benefits of secure financial transactions with negligible fees. You can transfer funds to anyone, anywhere in the world, instantly.

BitCoins were the brainchild of a person (or group of people) going under the pseudonym of Satoshi Nakamoto (the Japanese equivalent of John Smith) and were first launched back in January 2009. On the 27th February 2013, one BitCoin was worth USD33.72 and the current global monetary base of BitCoins then was estimated to already be well over USD275 million, making it the number one, fastest-growing, alternative digital crypto-currency in the world. BitCoins is a totally decentralised currency and is not linked to, nor controlled by, any specific issuer, central bank or government institution. It is totally independent and the way it has been developed means that there will be a controlled and pre-calculated release of new coins into the world's global international economy between now and the year 2140. With a totally capped market limit of 21 million BitCoins that will ever be released into circulation, unlike our fiat paper currencies which devalue daily as our governments print themselves into oblivion, BitCoins will never suffer from hyperinflation.


BitCoins can be exchanged for any conventional currency, at any time, through an ever-growing number of financial institutions climbing on board the rapidly growing BitCoin bandwagon. They can also be used to pay for products and services at an ever-growing number of online stores as well as many offline businesses who can see the great benefits offered by accepting BitCoins as a method of payment. BitCoins are transferred electronically across the internet or mobile phone networks via a peer-to-peer computer network which automatically verifies every single transaction so each transaction is unique and cannot ever be duplicated. Anyone can very simply and easily set up a mobile phone application to both send and receive payments via BitCoins.

In the States, two New Hampshire entrepreneurs have recently developed the world's first BitCoin ATM which converts dollars into BitCoins and deposits them instantly into your BitCoin eWallet. They are now planning to place them in bars, restaurants and retail outlets all across the USA. World's First BitCoin ATM

The BitCoin eWallet uses a very special cryptography with a 12 word key-phrase which is unique to each account and is one which would take even the world's most sophisticated super-computers over one hundred years to crack. The key-phrase should be memorised as this then gives you instant access to your BitCoin funds from anywhere in the world. Every transaction is completely anonymous and cannot be tracked or traced by any company or government body. One example of how this could be very beneficial is that you could leave your entire family fortune to your children by simply giving them your 12 word key-phrase in your last will and testament and it would then be totally free of any inheritance taxes or other deductions.

The Euro-zone crisis, combined with the current meltdown of Cyprus' banking system, has driven BitCoin prices ever higher as they continue to break new record highs. At the time of writing, the current price is now USD71.47 which is already over double what it was at the end of February 2013.

BitCoins are now hitting the mainstream media with headlines like:

In Spain, The BitCoin Run Has Started - Click Here

So, how high can BitCoins go..?

Currently, there are 25 new BitCoins generated with every 10-minute block. This will be halved to 12.5 BitCoins during the year 2017; and then halved continuously every 4 years thereafter until the hard total limit of 21 million BitCoins is reached during the year 2140.

The current monetary base of BitCoins is now valued at over USD600 million. The current target market cap of 6 million BitCoins, with a value between 600 billion to 6 trillion USD, means that each BitCoin would then be worth anywhere between USD100,000 at the low end market cap, and USD1,000,000 at the high end market cap. With this in mind, people thinking that the current speculative projections of BitCoins ever reaching USD100 are 'daring and optimistic' pale into insignificance in comparison. Over doubling from USD33.72 at the end of February to USD71.47 today also proves that breaking the USD100 barrier doesn't look to be that far away in the future and, if things carry on escalating at their current rate, that barrier could very easily be broken sometime next month. Each BitCoin is subdivided into 100 million smaller units called 'Satoshis', defined by eight decimal places.

For those who want to take physical delivery of real genuine metal BitCoins you can order them directly from: hardbtc.org. Exclusive reader's BitCoin offer - 10% discount valid until May 31st using discount code: ETHOS10%. They are currently available in three different denominations; 1 BTC, 5 BTC and 25 BTC. Exactly the same as taking physical delivery of gold or silver, you pay a premium over the current spot price on the day, but in the future I predict that they will become very well sought after collectors items and literally be worth a lot more than their weight in gold. These are the real McCoy; Genuine Casascius BitCoins. The coin has a peel back tamper-proof hologram sticker which reveals a 'Private key' inside that is accepted by the major BitCoin dealer MtGox.com where you can convert these physical BitCoins into normal digital BitCoins by using the 'Redeem Private Key' feature found under the 'Funding Options' menu. These BitCoins are ideal for anyone who is looking to start out with BitCoins and especially for people who are not very tech savvy. I would never recommend actually opening one of these BitCoins, as you will then always have a BitCoin to keep for a rainy day. Buy one today, keep it somewhere safe, then wait and see exactly what the value of BitCoins rises to as I'm quietly confident that, in years to come, you will be very pleasantly surprised with the outcome.

So, if you still haven't joined the new BitCoin revolution yet, you can download your FREE BitCoin eWallet today - Click Here.