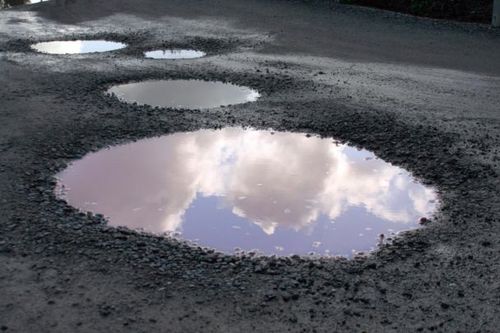 “A motorist who suddenly veers around a hole, or brakes heavily without warning, will give other road users very little time to react.

UK online motoring magazine Motortrades Insight reports that potholes are potentially damaging the finances of Britain’s hard-working, cash-strapped drivers - motorists who are being forced into balancing their finances to pay for additional car maintenance and repairs. Worse still is the potential hazard of trying to avoid them with drivers literally dicing with death on a daily basis.

A recent survey revealed two thirds of motorists have found themselves in a dangerous situation – swerving to avoid a pothole. Drivers in the West Midlands have been worst hit with 76 per cent swerving or braking suddenly to avoid the thousands of crumbling roads with estimates of 2.2 million potholes.

Throughout the UK, the overall average number of motorists forced to swerve stands at 8,682,000 – or 27 per cent. That is an 11.9 per cent increase from two years ago, when 7,757,000 drivers were estimated to have been forced to evade potholes, according to Kwik-Fit.

With Britain’s roads worsening, can it get any better? No, is the most obvious answer, according to Sir John Beddington, the UK’s Chief Scientist, who believes there is enough CO2 in the atmosphere for there to be yet more droughts and floods over the coming 25 years.

And if that proves to be the case, councils would literally be throwing money down the drain in the constant battle with the weather – snow, ice and storms being the cause of worsening potholes.

Of course we shouldn’t lose sight of the irony; people = cars = CO2 = bad weather = potholes. We are literally the masters of our own downfall.

“Potholes are a growing problem for motorists, not just through the damage they cause, but the fact that they force drivers to make risky manoeuvres,” explained Roger Griggs, communications director at Kwik-Fit. “A motorist who suddenly veers around a hole, or brakes heavily without warning, will give other road users very little time to react. It’s no surprise that more than three million drivers have either been in, or witnessed an accident caused by a driver avoiding a pothole and this recent spell of freezing weather is only going to make the situation worse.”

In avoiding potholes, around 2.2 million people had to come to a complete halt – causing a hazard to drivers or cyclists behind them who often have to swerve or suddenly brake heavily. That is around one million more motorists stopping completely compared with two years previously.

Local councils simply do not have the money to fix every pothole before more craters appear. It’s the archetypal Catch 22 situation. With winters like this year’s expected to become more commonplace over the next two decades, motorists should not remain too optimistic about the UK’s pothole war being won.

Motortrades Insight recently reported on the increase in the number of cars sustaining suspension damage as a result of poor road maintenance.

Pictures Captions
Hi-res versions of these images are available. Please contact us.
Pic 1. Some potholes
Pic 2. Some more potholes
Please include this statement: This article first appeared on 26th March 2013 on www.motortradesinsight.co.uk

Motortrades Insight is an online motoring magazine covering a broad spectrum of the automotive industry. The site was launched in 2012 and appeals to a very broad interest range covering the general motorist, motoring enthusiasts and the motor trade itself. The site also includes information about new and used car buying, motorsport, motorcycles, insurance, finance and more.

Motortrades Insight is based in Brentwood, Essex and is part of a group of businesses providing information and directory services to the automotive sector.
Kwik Fit (GB) Ltd