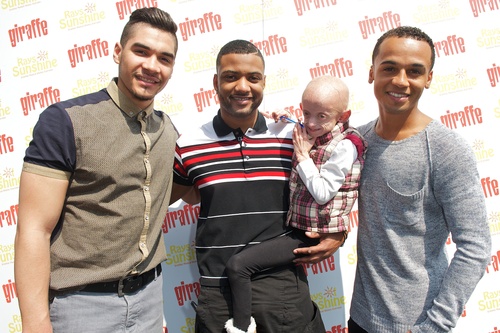 Despite the shock announcement that JLS are to go their separate ways Aston Merrygold and JB Gill demonstrated their commitment to Rays of Sunshine Children’s Charity yesterday (25th April) by sharing breakfast with seriously ill children at Giraffe restaurant in Marylebone.

They were joined by Aston’s childhood friend, Louis Smith MBE, attending his first engagement as an ambassador for the charity which grants wishes for seriously ill children in the UK. Rays of Sunshine


The breakfast event was held to launch Sunshine Breakfast Month an initiative by the charity which is being supported by Giraffe. From 28th April to 31st October, 50p from every Stacked Blueberry and Banana Pancake dish sold at Giraffe will be donated to Rays of Sunshine.