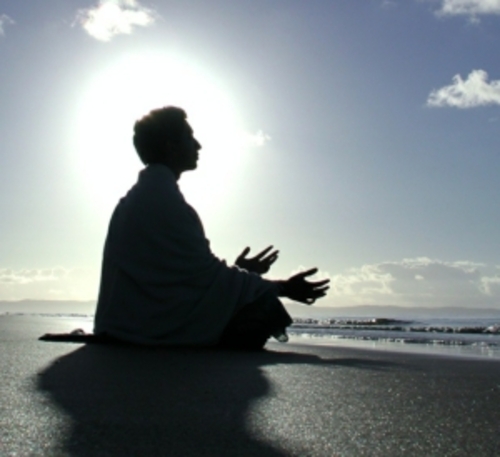 It seems as though the silence in meditation enhances positive emotions and reduces mental clutter which has been linked with mental illness. This could unwire negative patterns of thought and emotion

A new book, Silence Your Mind, from Australian researcher Dr Ramesh Manocha claims that the most effective way to combat modern stress is not just to meditate or practice positive thinking, but to completely empty the mind of thoughts for at least 10 minutes a day. The book, which is based on a series of clinical research trials over a 15 year period, gives examples of how this 'mental silence' technique, based on a practice called Sahaja Meditation, has helped people cope with many different problems, ranging from asthma to severe attention deficit-hyperactivity disorder in children.

Dr Manocha, who is an Australian GP and researcher based at the Sydney Medical School in Sydney University, has run several peer reviewed trials using the technique and discovered some surprising facts about the role of silence in helping the brain to cope with stressful situations.

"One of the most interesting things we found in our research is how this state of mental silence really helped improve people's mental health", he explains, "We were able to spot the difference between those who just sat there and appeared to meditate, and those who experienced a period of profound silence in their meditation."

The research team found that these short periods of silence could produce an overall health benefit that was up to three times greater than that associated with alternative stress relief programs.

Dr Manocha´s research on the power of thoughtless meditation has been backed up by a related trial conducted under the guidance of Dr Sheng-Chia Chung at the Dept of Epidemiology and Public Health in University College, London. In that test two groups of patients at a major hospital were compared, one receiving conventional medical treatment and a second group which added meditation to the treatment.

Although the two groups were similar, the meditation group showed a distinct decrease in anxiety, whereas the anxiety levels of the standard care group rose over the same period. Research into this area is still on-going, so it's difficult to pin down exactly why these benefits occur, although recent advances in our understanding of how the brain works gives some pointers.

"We now know that the brain is continually developing, and is more like plasticine than rock. This notion of neuroplasticity could explain why we're seeing the benefits in these meditation studies," says Professor Katya Rubia of the Institute of Psychiatry, King’s College London. "It seems as though the silence in meditation enhances positive emotions and reduces mental clutter which has been linked with mental illness. This could unwire negative patterns of thought and emotion, and allow us to replace them with more constructive feelings and behaviours."

Professor Rubia's 2009 review, published in the Journal of Biological Psychology, looked specifically at the neurobiology of meditation, and found that practising mental silence meditation appears to activate brain areas of attention and positive emotions and release mood stabilising neuro-hormones and transmitters such as dopamine, serotonin and melatonin.

This idea of meditation as a mental 'circuit breaker' may explain why it seems to be more effective in the long run when compared to traditional stress relief treatments such as positive thinking.

The 2011 Stress in America survey, produced by the American Psychological Association, paints a grim picture of the collective mental health of Western societies, with stress, bad nutrition and unhealthy lifestyle choices all combining to adversely impact our general well-being. It may be that a return to more simple practices, far from being some new age hippy hangover, could deliver the kind of relief we need to redress these imbalances. One day, instead of reaching for the pills, we may be able to simply close our eyes and let the silence in our mind supply the healing we need.