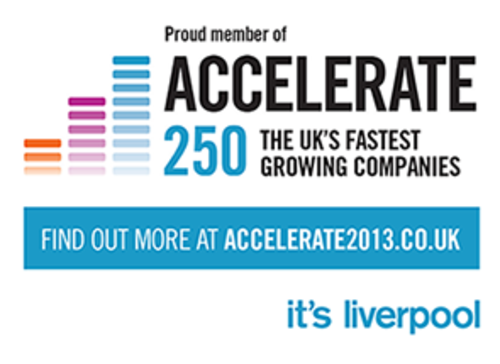 Widget UK Ltd has been invited to join the ACCELERATE 250, a new business community championed by Sir Terry Leahy and Lord Young and made up of the fastest growing companies in the UK.

The ACCELERATE 250 will be meeting for the first time at ACCELERATE 2013, Britain’s first flagship festival dedicated to high-potential businesses that is set to be held in Liverpool on June 27.

The festival aims to raise the profile of the UK’s fastest growing businesses and their impact on the British economy, with the ACCELERATE 250 seen as key to mobilising wider support for entrepreneurs and start-ups.

Lord Young and Sir Terry Leahy have identified representatives from the UK’s fastest growing small and medium businesses, the “vital six per cent” of companies that are creating more than half of the nation’s new jobs, calling on them to work together in identifying solutions to mutual obstacles.

The group will be working closely with one another to address the key issues and shared challenges that face all growing businesses, meeting for a series of interactive discussions and debates.

Members of the ACCELERATE 250 come from across the UK and represent industries from food and fashion, to pharmaceuticals and finance.

ACCELERATE 2013 will see more than 1,000 delegates descend on Liverpool for a festival like no other, with Wikipedia founder Jimmy Wales, lastminute.com co-founder Martha Lane Fox, former All Black captain Sean Fitzpatrick and Tech City UK CEO Joanna Shields among the confirmed speakers.

Sir Terry Leahy, former Tesco CEO, said: “It’s our belief that Britain’s prosperity in the 21st century global economy is going to be built on the success of high-potential, fast-growth businesses.

“That is why, this coming June, we will be assembling a new group of Britain’s brightest and best businesses to put them at the heart of Britain’s economic renaissance.

“It is our ambition that the 27 June will be just the start of the journey that sees the ACCELERATE 250 become the nucleus of Britain’s future high-growth economic success.”

Mark Needham, Chairman and Founder of Widget commented “We are thrilled that Widget has been identified as one of the UK’s most high-potential small businesses.

“In the 1980s and 90s Lord Young was one of our customers back in the day when we were a distributor for Psion's handheld computers. It is very pleasing to have the opportunity to meet him again.”

Max Steinberg, Chief Executive of Liverpool Vision, said: “ACCELERATE 2013 will be a fantastic opportunity to showcase that the business world works best when it works together, with the ACCELERATE 250 embodying this collaborative spirit and we look forward to welcoming them to Liverpool.

“Members will have the opportunity to share their thoughts on how to make the successful transition from start-up to high-growth business.”

Widget UK Ltd is based in Stevenage, Hertfordshire and is privately owned by its directors. It sells only to trade, not to the public.Widget specialises in finding markets for new and innovative electronic products. Its subsidiary, Now Mobile BV, is based in Eindhoven and sells a similar range of product to retailers in that market.

On 27 June 2013, the city of Liverpool will host Accelerate 2013, Britain’s flagship festival dedicated to high-growth businesses.

Bringing together outstanding speakers from the world of business and beyond, Accelerate 2013 will provide delegates with the inspiration and concrete tools they need to take their business to the next level.

The event will gather 1,000 delegates for a conference like no other, which will act as a unique accelerator for growth, motivating the best of British business to strive even higher and equipping them with the inspiration and insight to do so.