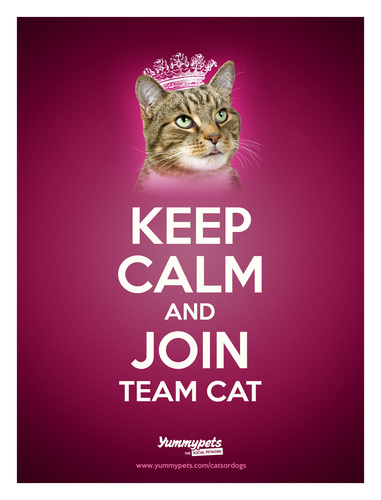 LONDON, 13 June 2013 – It’s a question that divides opinion and says a lot about your personality: are you a ‘cat person’ or a ‘dog person’? YummyPets, the leading social network for pets, is about to find out whether Britain is ultimately a nation of dog-lovers or cat-lovers, in what aims to be the biggest survey of its kind.

Opening today, is a simple voting mechanic on www.yummypets.com/catsordogs The kittens, we mean mittens, are off – as cat-lovers and dog-lovers try to get one up on each other and decide which animal ultimately unites the United Kingdom. The poll will be open on YummyPets for one month, and at the end of this time, the victor will be announced.

Stars of British reality TV are using their popularity to help get the voting started. Visit www.yummypets.com/catsordogs for more information on the captains for Team Dog and Team Cat.

Which pet will reign supreme and who will end up in the dog house?

Commenting from his basket in Bordeaux, Leo the cat, co-founder of YummyPets, said, “Here at Yummypets we know this question will provoke controversy. Already, high-profile dogs and cats are lining up on either side of the divide, ready to do battle and be declared the nation’s favourite pet. “

“Amongst my friends on Yummypets I can now count hamsters, fish, snakes and rats – but obviously we cats and our canine cousins are the most popular pets out there. But, we want to find out which one is THE favourite so have decided to launch this poll. In France, dog profiles are just ahead of cats, but, in the UK, it is still a 50:50 split. Make sure you have your say!”

About YummyPets
YummyPets – a social network for pet owners – launched in the UK in May 2013. The site was founded in France in January 2012 by two web entrepreneurs; Matthieu Glayrouse and Mathieu Chollon. YummyPets France now boasts over 150,000 members and 600 brands interacting on the site.

Featuring discussion forums, product comparisons and even the ability to set up reminders for vet appointments; Yummypets is the ultimate one-stop-shop for easy and safe interaction between caring pet-owners.