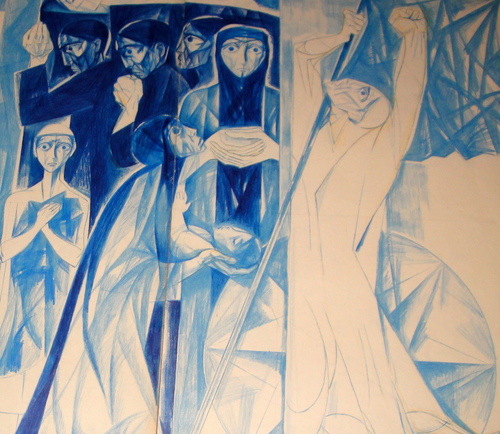 Art is now the last area of human activity to which the scientific method is still not applied - M.Sabri

The exhibition features the work of the pioneering Iraqi artist Mahmoud Sabri (1927 - 2012) and takes us through his lifetime journey, from his early work that reflected the suffering of the Iraqi people to his pursuit of a new form of art that represented the atomic level of reality revealed by modern science which he termed “Quantum Realism”.

His Quantum Realism collection is displayed for the first time in the UK. The exhibition presents a unique opportunity to see a comprehensive collection of Sabri’s work spanning over 4 decades.

Mahmoud Sabri was born in Baghdad in 1927, he studied social sciences at Loughborough University in the late forties. While in England, his interest in painting developed and he attended evening art classes. Following university, he worked in banking and at the early age of 32 he became the deputy head of the largest national bank in Iraq, the Al-Rafidain Bank. He resigned from the bank to take the responsibility for establishing the first Exhibitions Department in Iraq and to set up the first international exhibition in Baghdad in 1960. Following that, he decided to focus on painting, resigned from his job and went to study art academically at the Surikov Institute for Art in Moscow 1961-1963. After the Baathist coup d’état in Iraq (1963), he moved to Prague to join the Committee for the Defence of the Iraqi People. His paintings during that period reflected the suffering of the Iraqi people under that regime. From the late 60s he started working on Quantum Realism and continued to develop it until his death in April 2012 in the UK.

Mahmoud Sabri was a member of the Iraqi Avant-garde artists group. He was a founder member of the Society of Iraqi Artists. He had several publications on art, philosophy and politics (in Arabic and English). He lived most of his life in exile. (More info on Quantum Realism.

The exhibition is part of the Shubbak Festival. Shubbak: A Window on Contemporary Arab Culture. 22 June – 6 July 2013. A festival held every two years in London that presents outstanding artists and cultural events from across the Arab world. Shubbak (meaning ‘window’ in Arabic) offers people everywhere the opportunity to engage with and develop a greater understanding of Arab culture in all its forms.