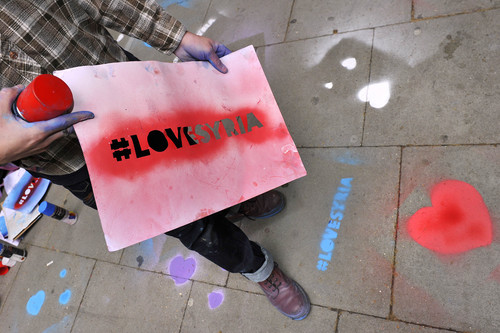 Imagine how it would feel to lose everything, to be forced to leave the place you know and love to protect yourself and your family. That is the reality for hundreds of thousands of Syrians who need the world’s help

On the eve of the Isle of Wight festival, Oxfam is launching its ‘Love Syria’ festival campaign. Over the summer the charity will be asking people to show their love for the people of Syria who are suffering a massive humanitarian crisis.

The charity has been campaigning on the festival circuit since 1993, however this campaign goes far beyond any previous festival appeal. This summer Oxfam will be asking tens of thousands of people to Love Syria by sharing a visual symbol of support and signing the charity’s petition calling for more aid and peace.

The humanitarian crisis is of staggering proportions and deteriorating daily. Violent conflict has forced over eight million people from their homes, nearly 1.5m of whom are now refugees in neighbouring countries. They include schoolchildren, students, musicians, accountants, and teachers - people from every walk of life who’ve lost everything. Oxfam is aiming to reach 650,000 people in the coming months, however the massive surge in refugee numbers and the scale of the crisis is leaving relief agencies overstretched and struggling to cope.

Oxfam will be at 17 festivals this summer urging as many people as possible to show their love and solidarity for Syria's people. Charity campaigners will be roaming the festival sites asking people to sign a petition calling on the UK government to champion the needs of everyone affected, by increasing international aid inside Syria and across the region, and supporting efforts to find a peaceful, not military, end to the crisis syriapetition .

Ben Phillips, Oxfam’s campaigns director, said: “Imagine how it would feel to lose everything, to be forced to leave the place you know and love to protect yourself and your family. That is the reality for hundreds of thousands of Syrians who need the world’s help."

“UK festivals are famous for showcasing a sense of togetherness and for the last 20 years people have shown their love for Oxfam by supporting our campaigns on some of the biggest issues facing our world. This year we really need people to show that love for Syria, so we can help those who are in desperate need.”

The Love Syria campaign marks Oxfam’s 20th year of campaigning at festivals. The charity also provides stewards for most UK festivals and is the only charity retailer with a festival shop.

• The charity campaign at most festivals on the UK circuit and can reach more than 34,000 sign-ups of support a year, making a vital contribution to making change happen
• Oxfam raises around £1 million a year through festival stewarding work.
• This year will be providing stewards at 20 festivals throughout the year.

Find out more information on Love Syria, to donate and sign the petition visit: www.oxfam.org.uk/syria-petition or http://www.oxfam.org.uk/getinvolved/festivals/campaigners