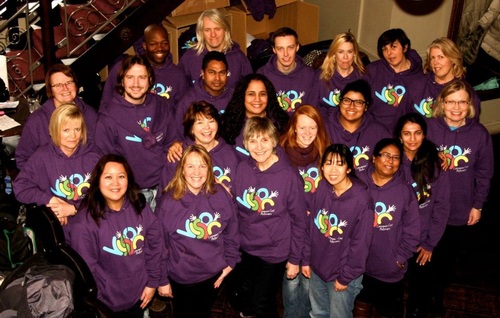 Early in 2013 a group of people from the many thousands who took part in the four London 2012 Opening and Closing Ceremonies formed a choir to perform an inspirational song penned on the back of the Olympic feel-good factor. The choir, called Vision, has added other motivational songs to its repertoire and on 22nd June 2013 will make its first public performances at the Proms at St Jude’s Music & Literary Festival in Hampstead and at the Voices Now Festival at London’s iconic Roundhouse in Camden. These inaugural performances will be followed by further concerts in July at Our Big Gig in Victoria Park, and at the Open East Festival which will celebrate the re-opening of the Queen Elizabeth Olympic Park (formerly the Olympic Park).

This is an amazing achievement for a young community choir and follows on the dream of Vision founder Phil Scotton - one of the thousands of individuals who volunteered their time during the summer of 2012. Emotionally stirred and motivated by the whole overwhelming experience, and never having written before in his life, he put pen to paper on the train home and wrote the lyrics for what has now become a stirring flagship song for the choir, entitled ‘Keep the Flame Alive’.

A tentative request posted in a Ceremonies Cast Facebook group for willing participants to work on the song resulted in a flood of volunteers interested in continuing their ‘2012’ experience. More than 60 people joined up and before long, Keep the Flame Alive came to life with the help of volunteers Mark Champion (music), Musical Director Rebecca Amissah (choral arrangement), and Tim Neumann (instrumental arrangement).

Scotton’s wish is to continue the 2012 legacy by raising funds for SportsAid and to build on the friendships formed through the volunteering experience. He and the choir hope to remind the public of the wonderful feel-good factor which was in such abundance last summer. Keep the Flame Alive is now in demo form and the group is seeking backing and sponsorship to record its flagship song as a charity single.

Phil says; “I aim to keep the legacy of the Olympics and Paralympics going and show that if you have the determination anything can be done. This is my dream and the reason I called the group ‘Vision’. We’re all so excited at performing and I can’t quite believe it’s all happening so quickly. My mum passed away last year before the games and never watched me perform – so I’ve dedicated this song and the group to her!”

Who are and what is Vision?

• A group of people who volunteered as ceremonies performers during the London 2012 Olympic and Paralympics Games.
• Until the 2012 games many had never danced, drummed or sung in their lives.
• The choir was set up in March 2013 and is currently self–funded through member subscriptions.
• The name was chosen by songwriter and group founder Phil Scotton.
• The flagship song is called ‘Keep the Flame Alive’ - an original work.
• The lyrics are written by Phil Scotton.
• Choir members (all volunteers) look after the website, PR, choreography, photography, finances, and general admin.
• As well as raising funds for SportsAid the group’s passionate aim is to continue the legacy of the games and prove that whatever shape, size, or age, whether physically challenged or able-bodied – anything is possible!

Angela Taylor is an independent PR business based in North London providing personalised PR and Promotional services for musicians and special events.