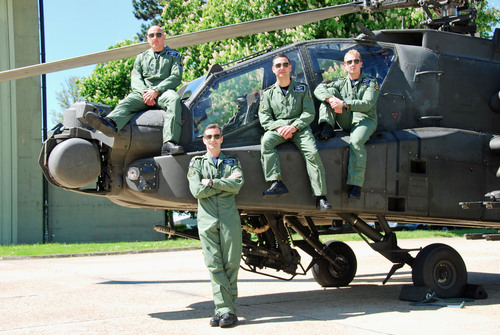 Oxford Vaughan, the luxury British sunglasses brand is proud to announce its affiliation with the Apache Attack Helicopter Display Team as Official Supplier of sunglasses.

Inspired by a style that inspired a generation, Oxford Vaughan’s SpeedBird range is rooted in endeavor, exploration and exhilaration and is the perfect choice for the Attack Display Team pilots who clearly demand the best.

The SpeedBird is an elegant evolution of the iconic aviator design – a true classic with ageless worldwide popularity. Shaped distinctively with 18K yellow gold, 21K white gold or 22K rose gold-plated aircraft grade titanium frames, and fitted with polarised world-renowned ZEISS lens technology, the SpeedBird’s sophisticated protection helps eliminate the reflective glare from the cockpit instruments and there’s no hint of compromise when it comes to high-paced and instinctive living.

The Army Air Corps Apache attack helicopter is one of the most sophisticated pieces of equipment in the world available to front-line troops, and has proven to be a unique battle winner in Afghanistan operating under harsh environmental conditions since 2006. The Apache attack helicopter can operate in all weathers, day or night and detect, classify and prioritize up to 256 potential targets in a matter of seconds.

The Apache Attack Helicopter Display Team is drawn from a pool of experienced, operationally ready Apache aircrew and ground crew; the aircraft used are from the operational Apache Squadrons. This year the display aircrew has been selected from 662 Squadron AAC which has recently returned from a very successful operational tour of Afghanistan. Staff Sergeant Jamie Boakes, is the primary display pilot with Captain Phil Wilson and Captain Harry Wales (Prince Harry) as the two front seat co-pilot gunners. Maj Stew Pearce and Capt Chuck Nicol are the Display Supervisors and Manager, whilst Sgt JJ John is the voice of the team providing the commentary. LCpl Luke Corbin provides expertise as the ground Arming Point Commander.

The team is displaying at various air shows this summer around the UK to show the capability and agility of the Army Air Corps Apache helicopter and will be wearing Oxford Vaughan SpeedBird sunglasses.

Oxford Vaughan sunglasses are inspired by classic British design and luxury, honed over three generations. Focused on performance, with over 140 stages of precision-engineering, each style is built by hand for the man who wants to tell his own story in his own way. Designed for a life that’s driven by a passion for adventure; for those who know there are some things that don’t need to be said, they have to be lived. No matter what you do, where you travel or how far you go, take the world on your own terms.