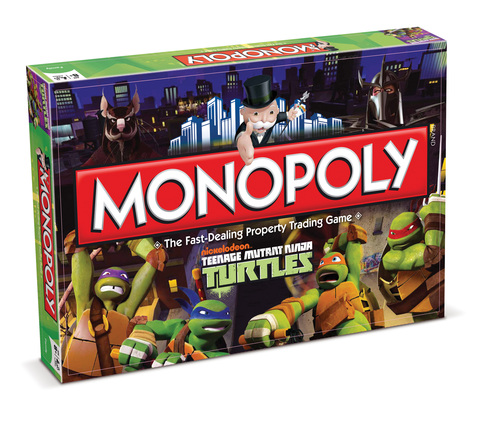 Will you be as bold as Michelangelo, as smart as Donatello or as wise as Splinter as you build your empire?

Learn the sewer secrets of Leonardo, Donatello, Raphael and Michelangelo with this new Top Trumps pack: Which of the Turtles has the most ninja know how? Is anyone a better leader than Leonardo? And can the brothers save New York from the Foot Clan?

Top Trumps has been a firm playground favourite since it first hit shop shelves in the late 1970s and to date, over 70million packs have been sold worldwide. Top Trumps produces hundreds of different packs on a huge variety of subject matter: from Dinosaurs to Baby Animals; Manchester United to Moshi Monsters and Hello Kitty to Top Gear. New licenses for Top Trumps this year include One Direction, Monsters University and now, Teenage Mutant Ninja Turtles!

The perfect game for any fan of the Turtles, this special edition of Connect 4 is the great classic game of 4-in-a-row with a Turtles twist: Turtle-counters for players to block each other’s path! Drop in your counters and try to outdo your opponents - who’ll be the first to get 4-in-a-row?!

The Teenage Mutant Ninja Turtles have moved out of New York and into the world of MONOPOLY! Travel around the board investing your money to try and bankrupt your opponents. Will you be as bold as Michelangelo, as smart as Donatello or as wise as Splinter as you build your empire?

ABOUT WINNING MOVES:
Winning Moves UK Ltd is an independently owned, London based, games company which owns and/or distributes a range of classic game brands such as Top Trumps, Regional MONOPOLY, Waddington’s Number One Playing Cards, PIT, Bananagrams and Pass the Pigs.

Winning Moves is also the exclusive licensee in Europe, Middle East and Africa for limited editions of Hasbro games including MONOPOLY, Cluedo, RISK and Twister.