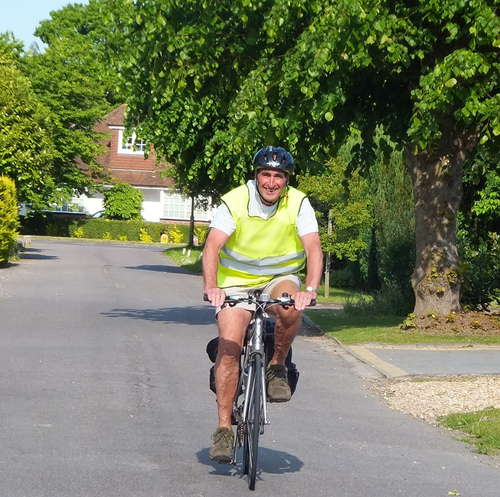 Inspirational news of sixty-eight year old Mr Robert Shatwell who was a life-long enthusiast with sixty years on the saddle and liked to put ten miles beneath the wheels of his cycle most days until painful knee joints seemed as if they would put a premature end to his active recreational lifestyle for good.
---

WOKING, SURREY: “Before I had the operation in March 2012 I could hardly walk, let alone ride a bike,” explained Mr Shatwell. “Both knees were bad and I was in so much pain it was all I could do to walk around to the local shop.”

Fortunately, Robert was referred with NHS funding to Consultant Orthopedic Surgeon Mr Paul Trikha FRCS of Runnymede Hospital who said, “There are three aspects to the success of any knee replacement – good surgery, a motivated patient, and the correct implant. I choose the MatOrtho® Medial Rotation KneeTM (MRK) because it moves like a normal knee.”

Thanks to Mr Trikha and the MatOrtho® MRK, Robert was off his crutches within a week of the operation, “and by the time I went back to see Mr Trikha I was marching like a guardsman! In fact”, adds Mr Shatwell, “after the operation on my right knee, my left knee doesn’t have to compensate so that pain has gone as well!’

Mr Shatwell was back on his bike in only six weeks, and by eight weeks he was back to his former daily ride of between three and 10 miles. Declaring that he feels ‘40 rather than nearly 70 years old now’ Robert said, ‘I didn’t expect to be back cycling so quickly. I was expecting a recovery time of around nine or even 12 months – I’m delighted!”