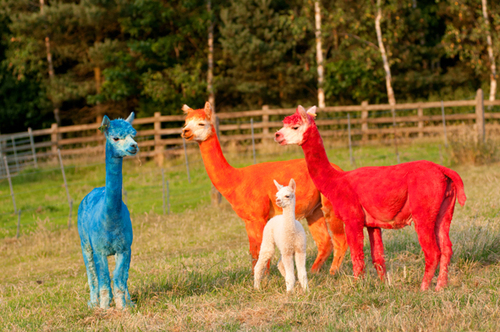 The hot weather left these furry alpacas feeling blue...and red...and orange but a close shearing is now helping keep them cool at the alpaca farm in Toft, Warwickshire as temperatures rocket.

“The shearers are flat out at the moment and even though our alpacas have become accustomed to the British climate, this heat wave is unprecedented. We thought we’d jazz up the field and dye a few in hot juicy colours in time for the school holidays,” commented Kerry Lord, Toft Alpaca

Toft is the UK leader in the manufacturing of home grown alpaca yarn and the design of DIY fashion knitting and crochet kits. It originates from the Toft Alpaca Stud, one of the largest alpaca livestock farms in the UK with a prize winning breeding and export program. Toft was founded in 2006 by Kerry Lord (27), daughter of alpaca farmer Rob Bettinson. The Toft farm now has an onsite shop and workshop space selling its own range of products, range of organic yarns and knitting and crafting kits and their online shop.

The Toft stud was established in 1997 by Rob Bettinson, a West End Musical director, with just 4 alpacas, and is now a thriving livestock business with 200 alpacas or ‘camelids’ that are imported into Europe. Toft Alpaca breed both the highly prized ‘Suri’ alpacas, and are the only UK manufacturer of the lustrous and fine Suri hand knitting yarn, as well as the more commonly known fluffy Huacaya alpaca.

The Toft Alpaca stud produces over 5,000 kilos of luxury super soft yarn produced from the waste alpaca fleeces, which are sheared once a year in the summer. Originally a bi-product of the breeding program, these fleeces are now turned into a range of eco-friendly natural wools and products, spun and knitted locally by 32 knitters across three generations. These are sold online and through The Toft on-farm shop. Toft has made a name for itself as a leader in the British knitting and crafting industries with its wide collection of knitting and crochet kits and extensive programme of knitting and crafting events hosted in their workshop space. Toft is committed to getting as many people crafting as possible!