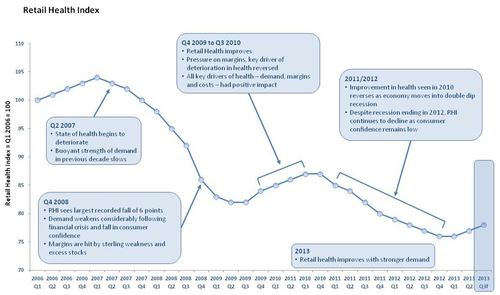 • The health of UK retail entered calmer waters in quarter two of 2013, picking up slightly as the long winter eventually reached its conclusion and retailers benefited from some pent up demand.

• Demand increased towards the end of the quarter, particularly at the end of June as improving weather across the UK had a positive impact on the sale of goods.

• Gross margins remained under some pressure with retailers continuing to promote their sales and discount.

• The health of UK retail is expected to continue its slight improvement in quarter three, although factors that influence purchasing, including the weather, could still have a positive or negative impact.

The health of UK retail has shown signs of steadiness rather than notable improvement over the past quarter, and quarter three is likely to be a continuance of this trend. This was the overriding view of the KPMG/Ipsos Retail Think Tank (RTT) at its quarterly meeting in July. The three key drivers of retail health – demand, margin and cost – were all relatively neutral, with demand slightly up on quarter one of 2013, margins still under slight pressure and cost factors largely negligible. The RTT’s Retail Health Index notched up another point, to 78, the second increase in succession since continuously falling from the beginning of 2011.

Retailers are at last feeling more positive than they have done for several months and appear to be focusing on the right areas of their business to avoid insolvency and, instead, concentrate on sales and future growth. However, there are no strong indications this marks the beginning of a robust recovery for UK retail.

The outlook remains a confusing and uncertain one for UK consumers too. Although most people are aware of their household incomes and budgets and tend to plan accordingly, with so much economic doom and gloom in the past 18 months, some may resort to the ‘sod it’ factor during quarter three and spend regardless of their personal financial situations.

The RTT identified that some sectors within retail are likely to benefit from pent up demand in quarter three. With more positive signs in the property market, for example, this may have a knock-on effect for certain retailers, particularly those in areas such as home furnishing and DIY. If people are buying new properties or refurbishing, invariably they will wish to furnish them. Similarly, with the sun shining and people able to get outside, garden centres can expect to see strong pick up in quarter three.

Many retailers continued to feel pressure to promote sales and discount in quarter two and margins have still been squeezed by consumers expecting to grab a bargain. The food sector, in particular, remains extremely competitive with many of the major grocery stores still discounting to claim market share. And because of the lengthy wintery weather conditions, the clothing market has been concertinaed into a very short season.

Notably, cost factors did not have a major influence of retail health in quarter two as petrol prices were lower (compared to the same period last year), rates were up roughly in line with inflation and labour costs overall were quite modest.

The RTT acknowledged that the arrival of Mark Carney, the new governor of the Bank of England, offered more positive signs for the retail sector as he indicated that interest rates would remain low and not stifle any chance of economic recovery.

Commenting, David McCorquodale, Head of Retail, KPMG UK, said: “Compared to the carnage that occurred in 2012, this year we are seeing a far more settled picture which is a welcome sign for the retail industry. Certainly, there is less gloom, and expectations that retailers will enter into administration are lower, but for those sitting on large debts, there is still inevitably a risk of insolvency.”

He added: “The retailers left standing appear to be working on the right areas of their business and are feeling and being more positive. Working capital is much tighter, retailers appear to be holding far less stock and in fact have done so for the past 18 months.”

Nick Bubb, independent retail analyst, said: “The retail sector continues to bump along a corrugated bottom and it’s a mixed and very messy picture. Consumers are to an extent fed up with it being so gloomy and may be inclined to resort to the ‘sod it’ factor – spending money regardless of the state of their finances. With interest rates so low, there is simply no incentive for them to save.”

Vicky Redwood, Chief UK Economist at Capital Economics, said: "Because things have been so bad for retailers for a long time, it can be easy for the media to latch onto any positive signs of improvement and blow any small signs of recovery out of proportion. The fact remains that most people still don’t have any more money to spend, but more positive economic news could have a bearing on their purchasing behaviour.”

Martin Hayward of HAYWARD Strategy and Futures, said: “My personal view is that retailers will experience a period of irrational exuberance from consumers over the coming months, especially if the fine weather continues in the UK. There is undoubtedly pent up demand and an urge among consumers to just ‘let go’. But if that happens, what will follow is a period of retrenchment and that won’t be a good situation for retailers.”

Richard Lowe, Head of Retail & Wholesale at Barclays, said: “Some retailers are doing better than others and are fine tuning their offerings, and as a result we’re seeing consumers voting with their feet. The current momentum will be maintained, but this will be in a measured manner. Consumers are still very much aware of their financial situations and while some may throw caution to the wind, the majority will be looking to manage their budgets.”

He added: “Retailers are now far more focused on how they can deliver the best possible service and are seeing the value in having multi-channel platforms. While the indicators are looking promising for the rest of the year, it is a continued focus on customer service that will really help differentiate good retailers and secure any spend that does take place.”

Mark Teale, Head of Retail Research at CBRE said: “There has been a marked mood-shift in UK commercial property markets since the beginning of the year. Activity still remains very southern/London focused but some very large shopping schemes, that were shelved following the onset of recession, are now edging back into viability in the provinces as well. In Inner London the market is approaching boom conditions, led from both the residential and retail sides. A ring of very large mixed-use developments - Nine Elms, Battersea, Elephant & Castle, Croydon, Victoria, White City, Paddington basin, Earls Court, Kings Cross, Wembley and others are at various pipeline stages; the wall of high-end riverside blocks continues to grow and Crossrail - with first phase opening due in 2018 - is triggering major development activity in the West End. Central luxury retailing and catering markets have never been stronger. Whatever the confluence of events that is sustaining the remarkable upturn, London is experiencing one of the most extensive growth phases seen in a generation. One thing is certain though, it has little to do with the UK domestic economy which remains mired in debt problems.”

Summarising the RTT’s discussion, Dr Tim Denison, Head of Retail Intelligence at Ipsos Retail Performance, said: “The health of UK retail has settled this year and is gradually edging back upwards, although there are no obvious signs that 2013 will be the year of recovery. There is still a lot of uncertainly in the sector, which to a large degree has consolidated, but is still finding its feet.”

The RTT was founded by KPMG and Ipsos Retail Performance (formerly Synovate) in February 2006. It now meets quarterly to provide authoritative ‘thought leadership’ on matters affecting the retail industry. All outputs are consensual and arrived at by simple majority vote and moderated discussion. Quotes are individually credited. The Retail Think Tank has been created because it is widely accepted that there are so many mixed messages from different data sources that it is difficult to establish with any certainty the true health and status of the sector. The aim of the RTT is to provide the authoritative, credible and most trusted window on what is really happening in retail and to develop thought leadership on the key areas influencing the future of retailing in the UK. Its executive members have been rigorously selected from non-aligned disciplines to highlight issues, propose solutions, learn from the past, signpost the road ahead and put retail into its rightful context within the British social/economic matrix.
Definitions: The RTT assesses the state of health of the UK retail sector by considering the factors that influence its three key drivers.