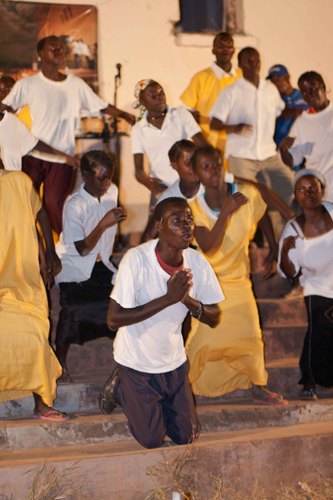 The name of Andrew Lloyd Webber, the composer and producer feted across the world for Phantom of the Opera and Evita, echoed through the remote wilderness region of Northern Mozambique at the weekend in a romantic setting far removed from Broadway or the West End.

Village choirs from 16 tiny villages within an area the size of Greater London spent hours walking and sailing in small local boats along the shores of Lake Malawi to arrive at a festival which has just won five years of financial support from Andrew's UK-based Foundation.

The singing, dancing choirs and their equally vocal supporters in the lakeshore village of Cobue nearly raised the church roof, now literally possible due to recent renovations and re-roofing efforts. The highly infectious music of local choirs and a talented Malawian band floated from the bullet-scarred walls (fading evidence of a brutal Civil War) across the aptly-named Lake of Stars to reach explorer David Livingstone's even bigger church on the island of Likoma.

An open-air feast on the lakeshore added to the magic of an event which vies only with the annual Dugout Canoe Race and local sports tournaments in the enthusiasm it evokes among the 20,000-strong Manda Wilderness communities.

The connection with the Andrew Lloyd Webber Foundation comes through the work of the UK-based Manda Wilderness Community Trust which joins local communities in collaboration on projects ranging from school-building, to agricultural training, to the highly popular annual Manda Wilderness Choir Festival.

The competition every year is intense, and this year was by no means an exception, putting visiting Guest Choir Director Mark Conley on his mettle as he walked the pathways (there are few roads) between the villages imparting musical wisdom and offering tips on how to carry off the prizes.

Nkwichi Lodge, situated on the “squeaking” white sands of the Lake Malawi shore, is proud to be the main backer of the Manda Wilderness Community Trust, which also leads conservation in one of Africa’s last true wildernesses. The UK charity insists on working at the pace of local communities and encouraging active community collaboration.

The Andrew Lloyd Webber Foundation has committed to support the Choir Festival over the five years with a grant of GBP20,000 – covering roughly two-thirds of the costs each year.