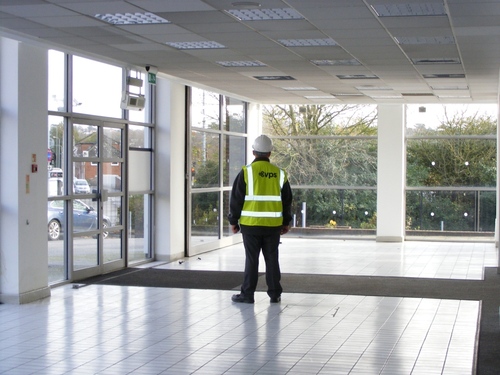 we thought it right to highlight some ideas and schemes that try to help find new tenants or uses for these properties.

As yet more familiar brands have fallen into administration recently – Dwell, Nicole Farhi and Modelzone to name a few – VPS, Europe’s leading vacant property specialist, reviews the growing number of ideas and schemes that are developing to bring more life into our High Streets.

“On Monday, it was reported that Savills property research now estimates the total number of empty shops across Britain to be 30,000.” Says Simon Alderson, Commercial Director for VPS, the vacant property specialists, and recently elected to chair the British Security Industry Association’s Vacant Property Protection group. “As VPS cares for many of these vacant units for their owners, keeping them ready for re-let, we thought it right to highlight some ideas and schemes that try to help find new tenants or uses for these properties.”

Last week the government announced a further £500,000 loan fund to set up more business improvement districts, whose remit is to bring new life to high streets, and somewhereto_ launched re:store, a scheme to bring young unemployed people into the mix with businessman Theo Paphitis as the face for the campaign.

“We’ve provided this brief guide in the hope that some young entrepreneurs will pick up opportunities to use these schemes as platforms for their ideas. For that reason, we’ve listed the community based schemes first, and the government ones second, as the former provide more access and opportunity for anyone, rather than a local authority, town centre or already established business.” Mr Alderson says.

Created to give new British brands a rare opportunity to get their products onto the British High Street, PopUp Britain have currently eight spaces in and around London and the South East, but have just opened spaces in the South West and in Lancashire. Their flagship popup store in Richmond opened in July and houses Britain’s most promising small enterprises for two weeks at a time. All of these start-up retailers already run online businesses, but none of them have the financial clout to take on a shop single-handed. PopUp Britain step in to offer a co-working, co-funded space for brands to experiment with, test the market and gain face-to-face customer feedback. It’s simple to apply. And they’ve just started PitchUp – a chance for British start-ups to pitch their products to John Lewis and Sainsbury’s.

PopUp Britain was created by StartUp Britain – a national campaign by entrepreneurs for entrepreneurs, harnessing the expertise and passion of Britain’s leading businesspeople to celebrate, inspire and accelerate enterprise in the UK.

somewhereto_ is a service that helps young people access space. Last week they launched re:store (the high street heist) – a chance for young people to take over shop spaces during the summer.

Since June 2010, somewhereto_ has unlocked over 380,000 sq ft of space (both physical and digital) across the UK which was previously empty or underused (the rent value of which if leveraged would exceed £2m).

somewhereto_ is funded by a £7m injection from the Big Lottery Fund, granted in December 2012 to support its UK-wide expansion over the following four years, in partnership with YouTube and delivered by youth engagement agency Livity.

Focus and Iceland businessman Bill Grimsey is writing an alternative to the Mary Portas review on high streets. He says “Instead of ubiquitous payday loans, pound shops and pawnbrokers, we could start planning fresh food zones, large-scale epic crowd games, play zones, town centre allotments and continuous street theatre. All of this is achievable; it merely scratches the surface of what's possible. But it'll require an acceptance that the current model is bust, a willingness to plan and Government support to help nurture a new model.” Anyone who would like to contribute to the review is invited to do so by emailing highstreetreview@gmail.com

3Space is a charity which works in partnership with landlords and leaseholders to offer organisations that benefit the community temporary free of charge access to otherwise empty properties.These spaces are made available to other charities, registered community organisations and social enterprises for temporary, pop-up projects.

They are funded by landlords, who benefit from having a charity use the space. The only ‘catch’ is that the properties remain on the market, which means that if a commercial tenant is found, 3Space has to leave. This can be in as little as 7 days, but some properties have been used for over a year.

Action for Market Towns founded its awards scheme in 2004 to recognise and showcase initiatives that are helping our small market towns to adapt to change and flourish.

Helping people to reduce, reuse and recycle empty shops and other spaces in towns and cities. The Empty Shops Network is a project from Revolutionary Arts, and has encouraged prototyping, testing and reinvention of the redundant spaces in the UK’s town centres. The Empty Shops Network has been commissioned to run projects across the UK with partners like the Culture Quarter Programme, Royal Opera House, South Kilburn Neighbourhood Trust, Woodard’s The Littlehampton Academy, The Meanwhile Project and Worthing Borough Council.

We Create* is a fashion-based social enterprise that supports young up-and-coming fashion designers in the UK. The organisation runs a blog about young British fashion designers as well as projects and events to help and support its participants to develop and run creative enterprises, including the use of pop-up shops in around the Birmingham and West Midlands area. They recently ran a pop-up shop and design studio in Wolverhampton city centre, on Victoria Street, to retail fashion labels designed by up-and-coming young designers and offer participants access to space, commercial equipment, and facilities to develop designs for retail and run fashion-based enterprises.

Meanwhile Space works with landlords, landowners, developers and local authorities to advise and deliver projects that relieve them temporarily of liabilities (insurance, rates, security etc.) associated with holding redundant shops, offices, cleared land etc. whilst an appropriate commercial solution is being sought. By working with local communities and other stakeholders, interim or 'Meanwhile,' uses are deployed to reanimate the space and provide opportunities for community benefit and social enterprise. They focus mainly in the London area, but have spaces in Northern Ireland.


Call to community organisations to add to this guide – other ideas and innovative examples of reviving empty high street stores who would like to be included in this guide, get in touch! e mail uk@vpspecialists.com

In 2011 the Prime Minister and Deputy Prime Minister commissioned retail expert Mary Portas to conduct an independent review of the high street’s future.

The Portas Review: an independent review into the future of our high streets was published on 13 December 2011. It set out what Mary Portas thought had led to the decline of the high street and made 28 recommendations about what could be done – by government, local authorities and business – to breathe life back into them.

The first recommendation from Mary Portas’s high street review (see ‘Background’ below), led to the government setting up 27 high street Town Team ‘Portas Pilots’ in England. These are aimed at encouraging local partnerships and consortiums to come up with innovative ideas about how to transform their local high street into a social place, bustling with people, services and jobs.

The government issued a progress report this month, which outlines some case studies including bringing empty properties back into use.

Government also set up the High Street Innovation Fund worth £10million to help those councils with the highest incidence of empty properties and those most affected by the 2011 riots.

The hundred councils who received this money have used it, for example, to
offer discounts on business rates or allow businesses to use properties for different
purposes than they were designed for, to attract new businesses and bring empty
properties back into use.

Allow the business community and local authorities to work together to improve the local trading environment. Local businesses come together to deliver a joint plan, funded by an increase in the business rates they pay. There are more than 150 now operating in England.

The Government has launched the Future High Streets Forum to build on the learning and experiences from the Pilots. The Forum brings together leaders from retail, property, business, academics, third sector, civil society and government to better understand the competition town centres across the country face and to drive forward new ideas and policies to help the high street compete and adapt.

VPS provide alternatives to High Street shops becoming derelict: an empty property is not end of the story, it’s part of the property lifecycle, and if looked after by a vacant property specialist it has a better chance of surviving, then reviving and bringing life back to a community, whether a village pub, a cinema or a High Street store.

Providing a risk assessment, recommending and implementing a range of solutions from physical and technological security measures through to maintenance and guards, VPS offers the most comprehensive vacant property protection service in the UK.

Every day, VPS support both residential and commercial property owners protect their vacant properties, cleaning them, preparing them and maintaining them in preparation for re-letting or selling. Last year over 20,000 properties that VPS managed were re-let or sold.

Notes for editors
About VPS:

VPS secure more than 90,000 properties and employ over 1500 staff in over 100 locations across the UK, the US, and mainland Europe. They specialise in securing, maintaining and managing vacant property across a wide range of customer and industry sectors.

Core building services cover the vacant, unoccupied and void property lifecycle from an initial risk assessment, to security, including guarding, monitoring, clearing, cleaning, maintenance and preparation. These services protect properties against unauthorised access and a variety of hazards such as arson, theft, squatting and unauthorised occupation.