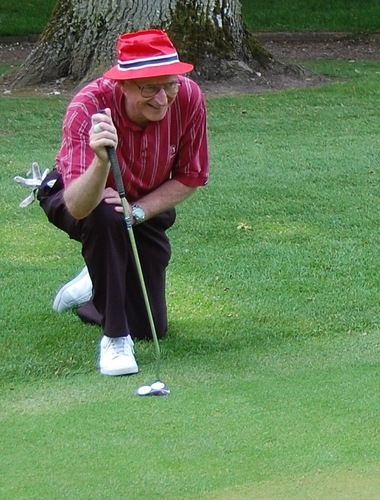 Still working as a physiotherapist at the age of 70, Mr Matthews was physiotherapist for The All-England Club Wimbledon Championships for 35 years, and led the team which he grew from four to 19. He was also physiotherapist to the Lawn Tennis Association for 25 years:

“I travelled with the International teams all over the world between 1976 and 2000 including our only appearance in the Davis Cup Final since the mid 1930s!” explained Mr Matthews, who lives in Hindhead, Surrey.

So it must have come as a shock to someone so experienced in helping others maintain peak fitness to be struck down himself by debilitating knee pain.

“I was finding myself in discomfort the whole time,” explained Mr Matthews, “and it became most noticeable when I was playing golf. Eventually I was forced to use a golf buggy to get myself between holes since I couldn’t walk, but after a while even standing for five minutes was plenty so I was forced to give up.”

As an eminent professional physiotherapist, Mr Matthews naturally studied the replacement knees available and even attended lectures by orthopaedic surgeons to gather all the facts before committing himself to an operation.

In the course of his research, Mr Matthews met Mr Paul Trikha, a Consultant Orthopaedic Surgeon, based in Surrey, “He was already treating one of my own patients”, explained Mr Matthews, “so I was familiar with his work. Mr Trikha recommended the MatOrtho Medial Rotation Knee™ (MRK).”

To say that the replacement knee operations were successful is something of an understatement. After the first operation Mr Matthews was back at work after only six weeks.

“I should have left it another fortnight but I was impatient!” he laughed. “I had the second knee replaced in June of last year, and I was back playing golf only six weeks later. My handicap is currently 12 but I am hoping to improve again, of course!”

In fact, Mr Matthews did rather more than most golfers returning to the sport. “I walk all 18 holes and I recently followed play in the BMW PGA Championships at Wentworth – that’s six and a half hours’ walking!”

“While I was studying knee operations I’d come across people who said the MRK ‘felt like having their old knee back and that’s how it is for me.“

And they continue to improve. “The left one bends at 115 degrees, while the right is 120 degrees!”

The man who couldn’t even walk from his golf buggy to the tee is now so fit and active again that he’s even planning to climb Ben Nevis in September with his son Jason!