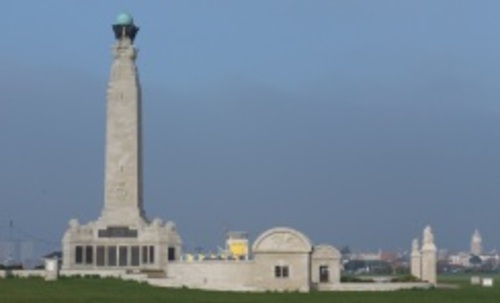 His Royal Highness the Duke of Kent will be in Portsmouth and Southampton on 19 February 2013 to unveil the latest information panels put in place by the Commonwealth War Graves Commission.

The Duke, who is President of the Commission, will be visiting the Portsmouth Naval Memorial and Southampton (Hollybrook) Cemetery.

The panels at the two sites are among 500 that the Commission is installing as part of a drive to provide more information for the public during the centenary of the First World War. More than 100 of the panels are being erected at sites in the UK, to provide information about the many thousands of First World War casualties, from all parts of the Commonwealth, who are buried or commemorated here.

Each of the panels carries information about the site of the cemetery or memorial, and the reason why it is situated where it is. But each panel also carries a QR (Quick Response) code which when scanned with a smartphone provides access to further information, including the personal stories of some of the casualties buried or commemorated at the location.

HRH The Duke of Kent said, "The Commonwealth War Graves Commission is at the heart of events to mark the centenary of the First World War. Our cemeteries and memorials will be the focus for many acts of remembrance over the coming years and this initiative will help inform visitors of the historical context which brought these places into being, while putting a human face to the names of those who died. It is a powerful means of combining traditional methods with new technology to ensure we never forget."

The QR code on the Portsmouth Naval Memorial panel reveals the story of David Bedell-Sivright, a Scottish Rugby international who captained the British Lions and died at Gallipoli; and the QR code at Hollybrook tells more about Lord Kitchener, who is commemorated on the Memorial there. The Portsmouth QR code also makes clear the great sacrifice the local community made in sending sailors to fight in the two world wars.

2. The Portsmouth Naval Memorial
The Portsmouth Naval Memorial commemorates some 10,000 sailors of the First World War, and 15,000 of the Second World War. The First World War Memorial was designed by Sir Robert Lorimer and the Second World War Extension by Sir Edward Maufe. It is located on Southsea Common, overlooking the promenade. The Memorial underwent a four-phase renovation, begun in 2009 and completed last year.

3. Southampton (Hollybrook) Cemetery
Southampton (Hollybrook) Cemetery contains 113 burials from the First World War and 186 burials from the Second World War. It also contains the Hollybrook Memorial which commemorates by name almost 1,900 servicemen and women of the Commonwealth land and air forces whose graves are not known, many of whom were lost in transports or other vessels torpedoed or mined in home waters. It also bears the names of those who were lost or buried at sea, or who died at home but whose bodies could not be recovered for burial.