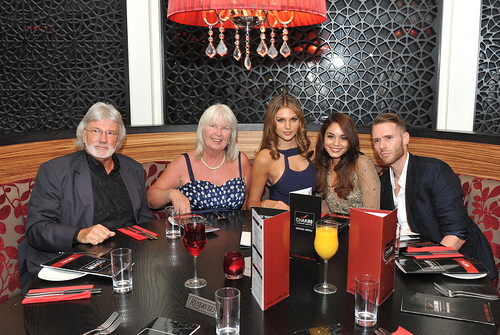 Vanessa, who once dated and starred alongside Zac Efron, was in London for the premiere of her new movie Frozen Ground. Instead of heading for the limelights of London’s West End, Mayfair and other upmarket eateries, she headed straight for Chak 89 in Mitcham for a tasty curry.

Looking stunning, Vanessa who was with her friends and her parents tucked into an array of Indian dishes that Chak 89 are so well known for cooking up.

We asked her what she thought of Chak 89 and she replied, “The place is cool, I loved the Chicken Tikka and Saag Aloo, which was out of this world, I have never had tasted anything like it, it was awesome”.

Chak 89, known for its traditional way of cooking Indian food is a restaurant based in Mitcham near Tooting. It has been credited and complimented by a host of stars including Bollywood stars, musicians, politician, sports, British actors and actresses and now Hollywood stars, what next we may ask?

After a night of indulging in Chak 89’s famous Indian dishes, Vanessa was kind enough to pose for some pictures, meet and greet some of the other diners and signed the famous Chak 89 board to put her name alongside a host of other famous celebrities.

To have a Hollywood star dump the limelight of Mayfair and opt for Mitcham is surely an achievement which reflects on Chak 89 as a landmark for celebrities surely making Chak 89 “A Spice above the Rest.”