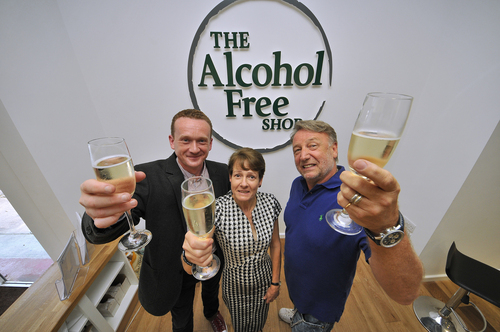 Hooky, a former member of Joy Division and New Order, has told how he had put his booze-fuelled 24-hour partying behind him.

He was speaking to guests when he officially opened the new showroom and national distribution depot of The Alcohol-Free Shop where he is a regular customer.

Hooky, who has recently released his recollections of exploits with Joy Division, following his successful book on the roller-coaster Hacienda years, is currently touring the US with his new band Peter Hook and The Light.

Before hitting the road, he agreed to open The Alcohol-Free Shop's plush new premises just outside city centre Manchester and stock up for the journey.

Hooky told guests it was no bull when he said: “I was really pleased when I found The Alcohol-Free Shop. When you can't drink alcohol anymore you get fed up looking down the wine list and finding nothing to drink. Now I have a choice.

“It enables me to enjoy myself without the guilt or that morning after feeling. All the taste and feeling of being grown up without the drawbacks.”

In Manchester's trend-setting tradition, in 2006 The Alcohol-Free Shop became the UK's first retailer to specialise in de-alcoholised and alcohol-free wines and now sells online across the UK and Europe.

It was launched by John and Christine Risby and has since attracted a string of high-profile customers as well as regular buyers across the UK and continental Europe.

John said: “We have a number of celebrity and high profile customers and we are delighted that Hooky could be with us today. We are very glad that the shop helps people who want to avoid alcohol for whatever reason.”

The day after the official opening, Christine was delighted to be chosen for a WOW (Women on Wednesday) business award by lingerie queen Jacqueline Gold who owns the Ann Summers brand.

Christine beat hundreds of hopefuls to win the WOW title through Jacqueline's weekly twitter competition that recognises the achievements of women in business.

She said: “It's great to be singled out by Jacqueline Gold. The award will mean the Alcohol-Free Shop will be given exposure to tens of thousands of Jacqueline's twitter followers.”

The Alcohol-Free Shop is currently among nominees in the Manchester Food and Drink Festival 2013 awards when customers get to vote for their favourite Food and Drink Retailer.

Bespoke furniture craftsman Paul Case ,who has been shortlisted for awards by style-gurus Terrence Conran and Wayne Hemingway, designed the shop.

The opening event included the debut hanging of works by Manchester artist Suzanne Henderson who is designing own-brand wine labels for The Alcohol Free Shop's new LONO range of wines due to be launched this autumn. Limited edition prints of her work are available at The Alcohol-Free Shop.