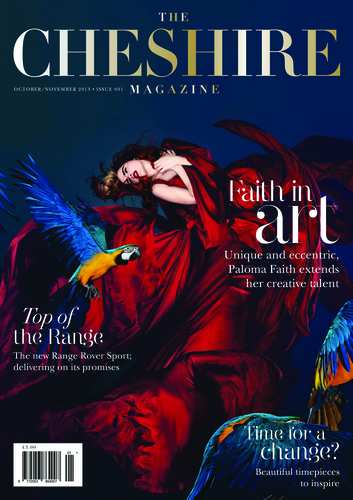 key features in the first issue including Ralph Lauren Home’s 30th anniversary and an interview with Princess Diana’s dress designer Jacques Azagury, who worked on the much anticipated biopic starring Naomi Watts

Runwild Media Group, the leading luxury publishing house are excited to announce the launch of The Cheshire Magazine.

The Cheshire Magazine will form part of an extensive luxury print portfolio which currently includes high-end London based titles such as The Mayfair Magazine and Canary Wharf Magazine.
This prestigious new addition to the Runwild Media portfolio will see its debut in October 2013.

The Cheshire Magazine will launch as the leading luxury lifestyle title for the North West of England with guaranteed circulations to match the class leading design, editorial and production quality.
Edited by Kate Houghton, the magazine will incorporate art, interiors, fashion & jewellery, travel, motoring, family, food & drink and property with key features in the first issue including Ralph Lauren Home’s 30th anniversary and an interview with Princess Diana’s dress designer Jacques Azagury, who worked on the much anticipated biopic starring Naomi Watts.

The magazine will follow a distribution strategy unlike any other title in the area, being hand delivered to selected affluent homes using the most sophisticated and meticulously planned distribution system, ever employed by a regional magazine ensuring a consistent and outstanding distribution every time.

“ We are proud to announce the launch of The Cheshire Magazine, the definitive luxury lifestyle title for the Northwest of England. Having successfully established ourselves as a leader in luxury publishing in London we decided that the time was right to extend our portfolio to other areas of the UK. The past year has been an exciting one for Runwild and has seen the business go from strength to strength with new investment in products, technology and people and The Cheshire Magazine forms part of this strategy". Giles Ellwood, Publisher.

The title will launch with two issues in Q4 of 2013 and will follow a monthly distribution from the start of 2014.

Upon launch, The Cheshire Magazine will be part of the Professional Publishers Association (PPA) and a registered member of the Audited Bureau of Circulation (ABC).

To view the cover image of The Cheshire Magazine please visit http://www.fileswap.com/dl/pli3SgqnUD/

Runwild Media Group is a dynamic, independent publishing house and a leader in the luxury magazine industry. Runwild Media specialises in producing monthly luxury titles, bespoke publications and a host of media solutions which produce remarkable commercial results. The Cheshire magazine is part of the Runwild Media Group portfolio and is positioned as the official magazine for the North West of England. The magazine features a blend of luxury lifestyle, high-fashion and local news.