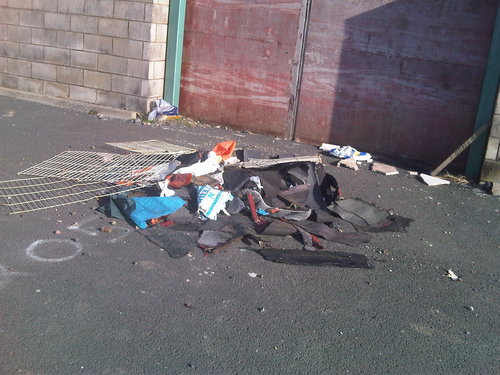 Do you have a vacant property?

60 fires a day were reported last year as taking place in or next to an empty property or derelict site in the UK. VPS, the vacant property specialists who look after tens of thousands of vacant properties across Europe, has issued some top tips to reduce the risk of fire especially during the firefighters strike, which begins today.

“Whilst fires can occur on any site, vacant properties are particularly vulnerable” explains Simon Alderson, Commercial Director for VPS, and also the chairman of the British Security Industry Association’s Vacant Property Protection Group. “Fires can start because of faulty gas or electricity power supplies, or by vandals, and an empty property is prone to neglect if it is not monitored 24/7 or regularly inspected, and an easier target than an occupied one. But there are some simple steps property owners can take to help reduce the risks of fire significantly, and some of these would apply just as much to occupied premises.”

Five tips to reduce the risks of fire

i) Remove combustible materials from inside or near the site

Clear paper rubbish and remove furniture or plastic that the previous tenants may have left behind, or may be gathering (such as post) whilst the property is left vacant. If there’s a skip or bins outside, make sure they are regularly emptied. There were 85,000 refuse fires last year.

ii) Turn off the utilities

Turn the electricity, water and gas off, and ensure they are kept securely off by using special locks, such as the VPS PacLock, which prevents accidental or malicious turning on of supplies. But be careful you are not compromising the terms of your insurance – during the winter for example, some insurers insist a temperature level of 15 degrees centigrade is maintained in order to comply with their terms. In these circumstances, ensure the alerts systems in Tip iii) below are in place.

There were no automated fire alarm systems in 50% of all commercial and public buildings fires last year (that’s over 10,000 fires). In addition to a fire alarm, there are also special alarms that use technologies that can detect if water flows through a pipe suddenly, or if someone tries to cut through some copper piping, such as VPS Veriflow. Metal theft of copper pipes dramatically increases the chances of fire damage if the pipes are providing mains gas supplies. For some sites, consider installing combined alarm and camera systems that not only detect intruders or fire risks, but also deter vandalism.

Today’s firefighters strike is likely to be one of a series of actions, and whilst those on strike will be allowed to return for major incidents, many fires will need to be attended to by a skeleton staff, reservists, contracted-out personnel or by the army. Keeping a regular eye on empty sites helps to ensure no build up of combustible materials or possible damage to utility supplies has taken place since the last inspection.

There are many options for protecting and securing vacant properties. Walking the perimeter will help identify any obvious weaknesses that might encourage vandalism or theft. Hardwood screens for ground floor windows, for example, are not as effective as metal screens, and are subject to attempts of arson in themselves.

“The firefighters strike appears to be carefully planned so as not to increase the danger of fires significantly, but vacant properties are not only more vulnerable, but also obviously less of a priority than occupied sites. ” Says Mr Alderson. “Our experience is in supporting both residential and commercial property owners to protect their vacant properties. We clean them, prepare them and maintain them in preparation for re-letting or selling, and last year over 20,000 properties that VPS managed were re-let or sold. We hope these tips will help protect them further during this period from the risk of fire.”

VPS and its sister companies secure more than 90,000 properties and employ over 1500 staff in over 100 locations across the UK, the US, and mainland Europe. They specialise in securing, maintaining and managing vacant property across a wide range of customer and industry sectors.

Core building services cover the vacant, unoccupied and void property lifecycle from an initial risk assessment, to security, including guarding, monitoring, clearing, cleaning, maintenance and preparation. These services protect properties against unauthorised access and a variety of hazards such as arson, theft, squatting and unauthorised occupation.