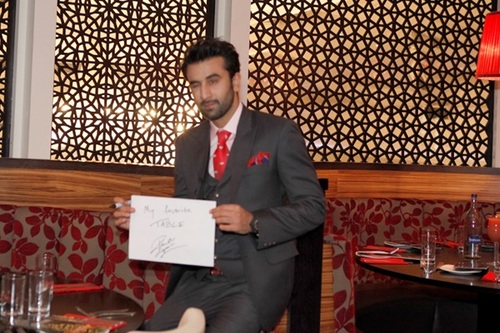 Chak 89, London’s award winning Indian restaurant were thrilled when Ranbir Kapoor requested if he could nominate a favourite table in the Chak 89 restaurant to go alongside the likes of Shahrukh, Saif and Dhamendra.

Ranbir was visiting Chak 89 for a press release for his new film Besharam, due out in October this year. Upon his arrival to Chak 89, Ranbir was ushered straight to the waiting media reception in Chak 89’s suite 1. Afterwards he was quickly taken to the Chak 89 restaurant for a private meal away from the prying eyes of the media and photographers.

Ranbir is tipped to be the next ‘King of Bollywood’. He looked totally at home as he mingled with family and friends of Frank Khalid, the owner of Chak 89, before settling down for an expertly prepared meal custom made to his requirements.

Speaking with Frank, Ranbir pointed at the table that he wanted to be named after him. Frank replied “you know what, I was just about to ask you, if you wanted to nominate your favourite table.” After his meal Ranbir signed the Chak 89 wall, nominated his favourite table and wrote a testimonial to acknowledge the quality of service and hospitality that he received from the Chak 89 team.

Chak 89 is an Indian restaurant based in Mitcham. It is known for its fine array of Indian dishes that have made it one of London’s top restaurants. It has been merited with many major awards including Best Restaurant in London Suburbs at the British Curry Awards; also known as the Oscar of the curry world.

When asked Ranbir what he thought of Chak 89, Ranbir had just one thing to say - “Chak 89, A Memorable Experience”