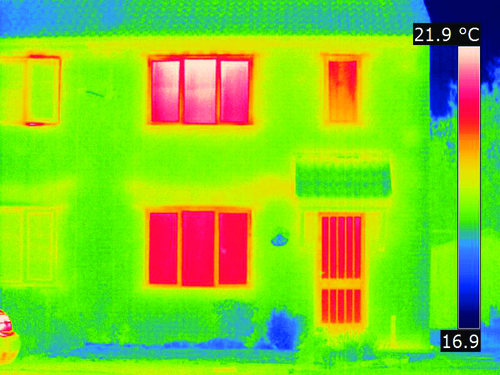 Millions of Britons are taking to their beds for an early night to help them warm up as they become increasingly worried about rising energy costs.

It’s little wonder we want to keep our heads under the blankets as a new survey shows just how confused we have become about the price of heating our homes and the true cost we pay for wasting energy.

Two thirds of those asked said they think they’re already paying too much for their energy, while almost half admit to worrying about meeting the cost of rising energy bills in the future.

The survey comes as energy companies start announcing a series of above-inflation rises in energy prices, including a 9.2 per cent increase from British Gas this week – and that’s on top of last year’s ‘big six’ energy price rises of between 6 per cent and 10.8 per cent.

But as well as throwing the spotlight on how worried we are about costs, the survey by Anglian Home Improvements also demonstrates some of the ingenious ways we try to keep warm without turning the heating on.

Along with going to bed early to snuggle under the duvet, popular ‘retro’ methods of keeping warm include using blankets and hot water bottles, while just over one in six people say they wear outdoor clothes such as hats, scarves and gloves in the house.

Other more bizarre insights into our energy saving ideas include lighting candles to generate heat, vigorously vacuuming all the rooms to warm ourselves up and using hairdryers to warm the bed.

Yet with so much effort going into stay warm, the survey also found that people are ignoring some simple ways to save energy and highlighted how much was being lost to waste.

Of the 2,040 adults questioned, 13 per cent of people said they have the heating on when they’re not in the house and as many as 16 per cent said they leave a window open all year round.

The survey also found that most people seriously underestimated how much poor window and door insulation was hitting them in the pocket. Almost half of those surveyed thought they might lose up to 10 per cent of their heating this way, but according to industry figures the true figure could be closer to a whopping 30 per cent.

Melanie McDonald, Head of Marketing and Communications at Anglian Home Improvements, says, “The study reveals that energy prices remain a concern for most British homeowners, yet as a nation we are wasting energy in ways that could so easily be fixed. A few simple changes could not only make our homes more energy efficient but also save us money and reduce our carbon footprint. As we head into the colder months, now is the ideal time to think about ways to keep our homes and families warm throughout the winter.”

Anglian Home Improvements has launched a new window scrappage scheme to incentivise homeowners to improve the energy efficiency of their homes and get up to 3,000 GBP off when they install energy saving windows. The promotion will run throughout October and November, giving homeowners a chance to upgrade their windows before the worst of the winter. To find out more, visit www.anglianhome.co.uk

Regional statistics for the figures quoted in the release are available upon request.

All research conducted adheres to the MRS Codes of Conduct (2010) in the UK and ICC/ESOMAR World Research Guidelines. Opinion Matters is registered with the Information Commissioner's Office and is fully compliant with the Data Protection Act (1998).

Established in 1966, Anglian Home Improvements is the UK’s leading home improvements company, responsible for the employment of 4500 people. With almost 50 years’ experience of providing uPVC double-glazing windows, Anglian ensures it is ahead of the competition with a continuing research and development programme. Anglian offers an extensive range of home improvement products, including double glazing windows and doors, conservatories, orangeries, solar products, garage conversions and Rooftrim.